Many of us learn in science class that our compass points to the magnetic north pole rather than "true north." That's a fairly simple concept on paper, but it has very practical implications in the real world. The Tampa International Airport recently shut down its primary runway to rename it -- because its designation on a plane's compass has shifted. The Tampa Tribune reports:

Later this month, the airport's east parallel runway and the seldom used east-west runway will be closed to change signage to their new designations.

The paper explains that the Earth's magnetic north pole is gradually shifting about 40 miles a year. There's a video explainer and a history of the locations of the pole going back to 1831 at their website. 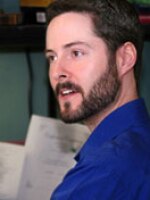 Scott Cameron
Scott Cameron is the Editor of Talk of the Nation, NPR's national news-talk call-in show. He brings more than a decade of news and radio experience to the show, which reaches more than 3 million listeners a week on more than 300 NPR member stations. As Editor, he helps guide the editorial agenda of the show and ensures that the program is balanced, accurate, timely, focused, well-written, and engaging. He's also an integral part of NPR's special coverage team, helping to edit and produce the network's live coverage of election night 2008, President Obama's inauguration, any number of congressional hearings and White House news conferences, and other events. He produces Talk of the Nation's weekly Letters and Opinion Page segments, oversees the program's "Today's Talk" email newsletter, and is a regular contributor to the show's blog and Twitter feed.
Latest Stories