Creepy as they are, their signature buzzing is the sound track of summer evenings in Colorado. KUNC gardener Tom Throgmorton has more on the Dog Day Cicada.

The other evening I was outside to cool off from the day’s heat.  The electric buzz of the dog day cicada was coming from high in our neighbor’s cottonwood tree.

Dog Day Cicada is the largest of about 28 cicada species found in our region.  The adults can grow to 1 ½ inch long and ½ inch wide.  Most of the species favor the heat.  They are prevalent on the eastern plains and the lowlands of the Western Slope.

The immature dog day cicada feed on sap from tree roots.  They feed underground for two to three years.  They prefer boxelder and cottonwood trees.  The immature cicada emerges from the soil in July and August.  They molt and change into an adult form.  After a few hours, the new adult is able to fly.  The adults feed on the sap of leaves and small twigs.

The only damage cicadas seem to cause is when eggs are laid.  The females insert eggs into twigs which leaves a wound.  The wound causes twig dieback.  The dieback won’t kill the tree.  But it looks bad when there are large numbers of cicada.

Cicada is Latin for `buzzer’.  The male dog day cicada is the noise maker.  It vibrates a special membrane along its abdomen.  The sound resonates in an internal chamber producing the electrical buzz noise.  Other cicadas make a clicking sound by moving their wings.

The hotter the day the more the dog day cicada buzz.  The sound usually comes from high up in an old cottonwood tree.  Almost instantly as the evening cools they stop.  Of course, all of that noise is to attract a female and to mate.

According to the book Bagging Big Bugs, netting cicada is the best way to collect them.  Follow a buzzing male in smaller trees or shrubs.  Sweep the net over the top of the plant to capture the bug.  Late July and August is the time to net a dog day cicada. 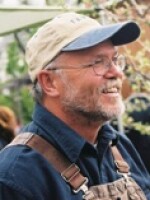 Tom Throgmorton
Tom has been offering garden advice on KUNC for almost two decades. During that time he has been the wholesale sales manager at Ft. Collins Nursery, Inc. Since January of 2005 he has been the owner and operator of Throgmorton Plant Management, LLC., a landscape installation and maintenance company as well as a horticultural consulting firm. He lives in northern Ft. Collins with his wife and two kids.
See stories by Tom Throgmorton
Latest Stories