Behavioral Economists On Why Some People Resist Wearing Masks

All right. Usually, when someone offers a simple solution to a big problem, we're thrilled, right? We just do that thing. But in this pandemic, one simple solution has become really controversial, masks. Mary Childs from our Planet Money podcast wanted to understand why people are resisting masks and if there was anything we can do to convince them.

MARY CHILDS, BYLINE: There's a field of economics dedicated to solving gnarly problems, problems that arise when humans choose not to do things that are in their own best interests, behavioral economics. Behavioral economists have helped America smoke less, save more for retirement, drink and drive less and practice safer sex. Mask-wearing is in the collective best interest. But in a pandemic, collective interests become individual ones really fast. So we hoped that maybe a behavioral economist could help us out here, so we called one, Syon Bhanot at Swarthmore.

SYON BHANOT: Unfortunately, I think you've hit on the central question of our time, right? Why are people resistant to pro-social behavior?

CHILDS: He says there are a few things about a pandemic that make it hard for us to grasp. For starters, salience. We tend to look around us to what we can see and feel for guidance.

BHANOT: The cues that you're getting are not, you know, that it's this devastating disease, per se. Most of us walk around our neighborhoods and people don't - you know, aren't falling down on the street and there aren't ambulances all over the place.

CHILDS: Then we take whatever we see and over-extrapolate. We mistake the local for the national. This is the law of small numbers. But we also struggle with large numbers, like exponential growth. We hear there are 12 cases. And we can't fathom that that could be 12,000 in a few weeks. So when corners of America untouched by the virus started getting lectures from urban America, where the virus was raging, Bhanot says this finger wagging sparked what's called psychological reactants.

BHANOT: Which is that when people perceive external constraints on their freedom coming from the outside, they are prone to push back against those constraints.

CHILDS: Which is in part how masks became a politicized symbol, a signal of in-group identity. Instead of health or science, for some, it became about individual rights.

BHANOT: So if you walk up to someone not wearing a mask and yell at them, that can entrench them even more, right? That can make them even more resistant to the behavior change. So you know, I certainly think that's one thing I would suggest that we not do.

CHILDS: We asked Bhanot if behavioral economics had suggestions for what we should do, like, say the Planet Money podcast wanted to make our own PSA to encourage mask-wearing. Bhanot mentioned one particularly powerful motivator, especially when trying to get people to act in the collective interest, are reputation in a community. Every community has norms. Like, when you are standing in any line, you just don't cut, mostly because you don't want to look like a jerk. So we have to establish a norm and then communicate it effectively.

The message has to be unambiguous - yes or no. It sounds obvious. But it's something we really messed up with masks. At first it was, don't wear them. And then it became, do you have a ratty T-shirt that you could wear on your face? All this made it hard to know what to do, much less what norm to enforce. And the message matters. Research shows that in times of uncertainty, people lean on their social circles for information or respected local leaders. So maybe the mask message should come from local doctors or nurses or, for kids going back to school, Big Bird.

CHILDS: Lastly, emotion can help except when it goes too far. Research shows if you make people too scared with no sense that they can solve the problem, they fritz out and don't act. So behavioral economics says our PSA needs to be clear, delivered by a trusted messenger and use emotion, but not too much. And we figured that people who don't want to wear masks love their families, right? So we asked America's mom of the hit TV show "Family Guy" if she would record one for us.

ALEX BORSTEIN: (As Lois Griffin) Hi. I'm Lois Griffin, proud wife, full-time mother and one-time mayor of Quahog. Two of those things are true. Now, I understand that you have been out and about not wearing your mask. (Laughter) What are you doing? Seriously, what are you doing? That's the stupidest thing I've ever heard. The sooner you wear your mask, the sooner this thing will be over. And we can get back to business as usual. Wear your mask. Wear your mask. Let people live, huh? Take care of each other. 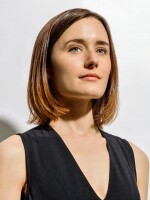 Mary Childs
Mary Childs (she/her) is a co-host and correspondent for NPR's Planet Money podcast. Before joining the team in 2019, she was a senior reporter at Barron's magazine, where she covered the alternatives industry, the bond market and capitalism. Before that, she worked at the Financial Times and Bloomberg News. She's written about the pioneering of new asset classes like time, billionaire's proposals to solve inequality and diversity and discrimination in the finance industry. Before all that, she was also a Watson Fellow, spending a year traveling the world painting portraits. She graduated from Washington & Lee University in Lexington, Virginia, with a degree in business journalism and an honors thesis comparing the use and significance of media sting operations in the U.S. and India.
Latest Stories