Stromae channels the complexity of humanity in long-awaited album 'Multitude'

Stromae first exploded into the music world in 2009, with the Belgian-Rwandan pop star having since sold over 3 million albums around the world. He's just released a third album, Multitude, his first in eight years.

Weekend Edition host Scott Simon speaks with electro-pop sensation Stromae about that new album and the musical influences from around the world that inspired it.

This interview has been edited and condensed. To hear the broadcast version of this conversation, use the audio player at the top of this page.

Scott Simon, Weekend Edition: Let's start with the song "Santé," which is a toast in the French-speaking world. It's a word for "to your health." What inspired you to salute these everyday heroes?

Stromae: I was inspired by the person who cleans up my house, to be honest – her name is Rosa. I wanted to celebrate the one who can't celebrate when we are partying.

It's been eight years since your last album – a long wait for your fans. Tell us what you've been doing. Tell us how the creative process went over those eight years.

Stromae: I never stopped making music during eight years, but I prefer to focus on other projects. I just didn't want to have the spotlight on me anymore. And it was really good. I got married, I had a baby.

I just needed to have a life.

Let me ask you about the title, Multitude – and I confess it got to me because I tell our daughters, who are American and French and Chinese, that they contain multitudes. What do you mean by multitudes?

Stromae: At the very beginning, I wanted to call my album Folklore – and someone took the name for her album, and her name is Taylor Swift. [Laughs]

What are the influences you hear in your music as you put it together?

Stromae: Yeah, there is a lot of influences – I just wanted to travel all around the world. Of course, there's my African roots. Also, some Asian instruments. And I work with a charango player from Bolivia.

Thanks to my mother, even if we didn't have a lot of money when we were young, she wanted to put the only money she had into traveling ... we had the chance to go to a lot of countries. I wanted to mix everything, to have the feeling that you travel but you never know where you are exactly.

What's the first instrument you picked up?

Stromae: When I was young?

Stromae: Do you remember STOMP?

STOMP, yeah, sure. I saw STOMP.

Stromae: That's the first concert I saw in my life, and I knew very fast that I just wanted to do the same, like, just making drums on everything. That's something I really love.

What do you hope the world gets from your music now?

Stromae: That it's possible to enjoy and to dance on music that is in another language. In Belgium, we so used to listen to English music that we don't really understand, and we can dance on it and appreciate it. And I'm sure it's possible to do it the other way around.

Scott Simon
Scott Simon is one of America's most admired writers and broadcasters. He is the host of Weekend Edition Saturday and is one of the hosts of NPR's morning news podcast Up First. He has reported from all fifty states, five continents, and ten wars, from El Salvador to Sarajevo to Afghanistan and Iraq. His books have chronicled character and characters, in war and peace, sports and art, tragedy and comedy.
See stories by Scott Simon 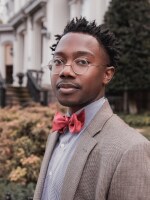 Andrew Craig
Andrew Craig is a journalist from Denver, Colorado. He loves to learn about the world, and tell stories that raise critical questions and inspire empathy. A graduate of Yale University (BA '14) and The University of Texas at Austin (MA '18), he began working for NPR in 2019. His hobbies include reading, people watching, and exploring new places.
Latest Stories