Community
StoryCorps
StoryCorps is an independent nonprofit organization whose mission is to provide Americans of all backgrounds and beliefs with the opportunity to record, share, and preserve the stories of our lives.

StoryCorps in Fort Collins: 'I Had Never Been So Excited And Scared In My Entire Life'

The StoryCorps MobileBooth wrapped up their stay in Fort Collins earlier this month. For the rest of May, we'll bring you a few of the stories recorded at the booth.

Liz Barnez and Lori Daigle came to tell the story of their remarkable relationship. After falling for each other as teenagers in New Orleans, they fell out of touch for years, until a chance encounter on Facebook brought them back together.

Liz Barnez: We were growing up in New Orleans — good Catholic girls — and both of us played sports for rival high schools. I was on the junior varsity team, and you were on the varsity team, and we watched varsity play first. I remember watching you play because you were such an amazing athlete, and you had a cute nose. We played each other [during] practice games and things like that, so I remember meeting you then.

Lori Daigle: I was just thinking about the way we felt about each other in the summer of '81. We knew something was going on but we didn't know how to talk about it or describe it.

Barnez: For me, I was having some feelings, but didn't quite know what those were because we were good Catholic girls and we had no role models back in the eighties for what that even was. There was definitely an attraction, and I think one of those nights we kissed — I can't remember. But I do remember when we used to tour with the softball team, we'd go on the road, and we'd sleep in the same bed and hold hands under the covers. I remember that.

Daigle: Yes! I remember that and I remember never being so afraid and so excited in my entire life. I had just adored you for so long, but we were so young and we weren't supposed to feel the way that we felt. It was frightening, loving you the way I did.

Barnez: I remember being really scared, because we kissed. We never talked about (it) with each other. We just kind of went about business as usual and then you went off to college, and I stayed in New Orleans. We lost touch.

Daigle: I was always afraid to tell my parents how I was feeling. When I did at 19 it really didn't go well at all, and it really made life difficult for me. You know, "Who am I?" Because I knew what I wanted, and I knew who I wanted to be, but it led to, "How do I get back into my family?" In doing so, I guess the answer was to get married to a man, and have children. That's what I did for 17 years.

What did you do in that time?

Daigle: Two weeks after my divorce was final, you and I reconnected on Facebook - 28 years later. All the old memories all the old feelings, everything just came flooding back.

Barnez: After we reconnected, you came out to Colorado to visit. Like, "Let's see if we can get together."

Daigle: I just saw you and all I wanted to do was kiss you again.

Daigle: In the parking lot of D.I.A.—

Barnez: In the parking lot of D.I.A., so romantic. We had learned how to kiss over the years.

Daigle: Had a little more confidence.

Barnez: Should we end with a song?

Daigle: I think we should end with a song.

Lori and Liz were married in 2015 - they live in Fort Collins. 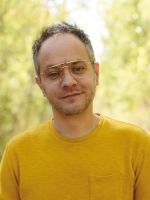