When you open a window in your home, do you consider yourself outside? Probably not. That was the argument that inmates at Colorado State Penitentiary made in a class-action lawsuit [.pdf] against the Colorado Department of Corrections. The case has been settled and the Department of Corrections will build three new recreation yards at the Cañon City prison by the end of 2016.

The suit stemmed the case of inmate Troy Anderson, who was in long term administrative segregation at CSP. Colorado's position was that the provided exercise room, which had an open barred window, constituted outdoor exercise access. The 2012 decision disagreed, saying that denying Anderson outdoor exercise violated the Eight Amendment of the U.S. Constitution.

"So we thought, now they're finally going to build exercise yards at the Colorado State Penitentiary... They did not," said Amy Robertson, the co-executive director of the Civil Rights Education and Enforcement Center. "They took Mr. Anderson and moved him to Sterling Correctional Facility."

Moving Anderson though didn't solve the issue of outdoor exercise for the rest of the inmates at the state's maximum security prison. As a result, the Civil Rights Education and Enforcement Center along with the Civil Rights Clinic at the University of Denver Law School filed the suit.

Why They Brought A Class-Action Suit

" …working with the Civil Rights Clinic at DU, we started investigating the possibility of a class action. And the great thing about a class action in this context is it would have the ability to take that [2012] decision the court reached, and we were fairly confident that a second court would reach the same conclusion. That conclusion would apply to the entire class of inmates at CSP so there would be no choice but to build yards. To actually give people outdoor exercise."

On The Role of University of Denver Law Students

"The students did an amazing job investigating these claims. They drove down to CSP constantly and talked to many inmates and learned about their experiences being kept away from outdoor exercise. And by the end of 2013 they had gathered enough evidence that we were able to file this case -- the case that just settled -- as a class action with three named plaintiffs."

"They're terrific yards. If you imagine CSP looks like a clover, a three-leaf clover. And at the edge of each of those there will be built a yard. So there are three new yards, identical and each one has a half of a basketball court. It has a half track and it has a table, and I believe it's going to have lifting equipment." 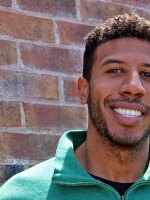 Kareem Maddox
I was what you might call a "journalism nerd" in high school -- I edited my school newspaper, went to journalism camp, and thought Charlie Rose was cool.
See stories by Kareem Maddox
Latest Stories