After Tragedy In El Paso, A Special Visa Could Provide Some Survivors A Glimmer Of Hope | KUNC

After Tragedy In El Paso, A Special Visa Could Provide Some Survivors A Glimmer Of Hope

On Aug. 3, 2019, a shooter at a Walmart in El Paso, Texas, took the lives of 22, injured over two dozen and changed a whole community. The shooting was the worst targeting Latinx in modern U.S. history.

But as some survivors begin to process the horror, there might be a glimmer of hope: Those without a green card may now be eligible for a special visa, designed to protect crime victims.

The special permit, referred to as a U visa, was created by the Congress specifically, “for victims of certain crimes who have suffered mental or physical abuse and are helpful to law enforcement or government officials in the investigation or prosecution of criminal activity.”

The goal is to help crime victims feel safe coming forward to assist law enforcement. “It gives people the opportunity to have a voice where otherwise they would be afraid to use that voice, due to possible retaliation or deportation,” said Pamela Muñoz, an immigration attorney in El Paso.

“Regardless of your origin or the color of your skin or if you speak English or Spanish,” said Christina Garcia, director of the Crime Victims Program at the Las Americas Immigrant Advocacy Center, a legal non-profit in El Paso, “you were a victim, and you have rights in the United States as being a victim of a crime.”

Alison Kamhi, an immigrant rights attorney at the legal non-profit Immigrant Legal Resource Center, said the visa covers multiple violent crimes, “anything from rape to domestic violence to felonious assault to murder to a whole range of different things.” Some family members of murder victims are also eligible.

“The fact [is] that El Paso is a community with not just a large immigrant population, but a large number of mixed-status families where some people will have resident or citizenship status but others won’t have anything,” said Muñoz, who offered her services to victims and their families after the shooting.“It is kind of implied that there will be people who are eligible for this.”

In fact, local immigration lawyers realized there would likely be victims — with a range of immigration statuses or a border crossing card — who could now be eligible for the U visa.

The Beginning Of A Long Process

But being certified as a victim of a crime is just the first step in the long process of getting a U visa. Petitioners need to follow a lengthy, bureaucratic process.

“It’s very difficult,” said Christina Garcia from the Las Americas Immigrant Advocacy Center. “Definitely a very long tedious process, because the burden 100% falls on the applicant. And so even if a person says, ‘I was there. I have mentally experienced a lot of trauma and I’m suffering,’ it doesn’t guarantee that [U.S. Citizenship and Immigration Services] will grant the visa.”

The first step is obtaining a document that certifies that one has not only been a victim of a crime but helpful to the investigation. This certification must be signed by a law enforcement official.

For Marta, getting her certification took months.

Marta was working at the Route 91 Harvest music festival in Las Vegas on Oct. 1, 2017, when a shooter opened fire from a nearby hotel. He killed 58 people and injured hundreds. The incident remains the deadliest mass shooting in modern U.S. history.

“I lived it. I saw it with my own eyes,” recalled Marta in Spanish. “I stumbled over people who were injured or killed while I was running this way or that other way, because I didn’t know where to go. There was no way out.”

— For her security, we are referring to Marta by her first name for this story. —

Leo Murrieta, director of the non-profit Make The Road Nevada, said that there were “over 120 undocumented support staff working the festival” like Marta.

A lot of them have already begun the process of applying for a U visa.

“These folks experienced and survived the shooting just like every other person [there],” Murrieta said. “There are stories of some of these people, some of these undocumented folks, saving other people’s lives, dragging them to safety, pulling them out of the line of bullets and really putting their lives on the line to save other people at the festival.”

Murrieta’s organization, Make The Road Nevada, has helped more than 70 of those undocumented survivors begin the process of applying to the U visa.

After months of waiting for her certification from law enforcement, Marta says she and other survivors were desperate, so she contacted Murrieta.

Eventually, after a meeting with Clark County Sheriff Joe Lombardo, the victims started to receive their certifications.

And when Marta received her certification, it finally felt like the U visa could be a real option.

“I thanked God,” Marta said in Spanish, “because I said to myself, ‘Yes, it’s real and it’s going to happen. After all the bad things — after this tragedy — something good is going to happen to us.”

But the certification was just the first part of the process.

The next step is the lengthy approval process.

Theoretically, the next step would be you file your certification and application, and wait for a decision. But there’s a bit of a backlog.

By design, U visas have a cap on how many can be issued each year. Only 10,000 U visas can be approved annually.

Since 2015, USCIS has received more than 30,000 U visa applications a year. And an additional 20,000 applications are filed annually by family members of a victim, and are approved when the victim’s application is approved.

So when the cap is reached, anyone over that 10,000 limit — and who qualifies for the U visa — receives “conditional approval” or pre-approval, along with a permit to work legally in the United States. Those with conditional approval are put on a waiting list until they move up in the queue. 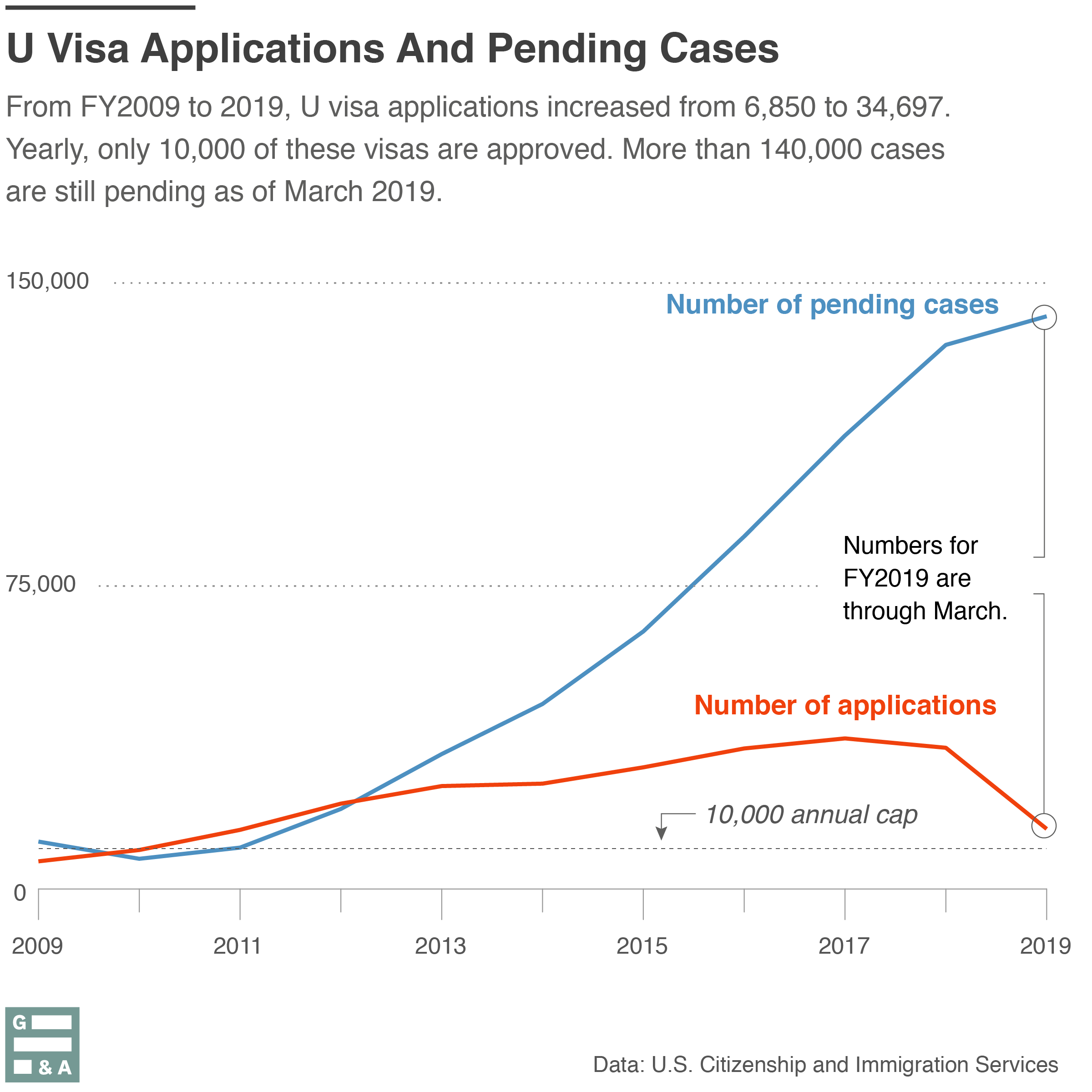 On average, the wait time between when U.S. Citizenship and Immigration Services (USCIS) receives someone’s paperwork and decision is about four years, according to the USCIS website.

But that expected wait time varies.

Christina Garcia said that during that time, USCIS can ask for more information about the nature of your suffering or for, “more information regarding your immigration record or your history of living in the United States.”

This final approval can take years.

Beyond the stress of years of waiting, there’s also risk. Before you’ve reached the conditional approval stage, you’re still at risk for being deported. In addition, due to a new directive released Aug. 2, 2019, Immigration and Customs Enforcement now has authority to target individuals waiting in line for a decision, without first consulting with USCIS.

As a result, lawyers worry some victims may be afraid to come forward and put themselves on authorities’ radar.

But should one successfully make it through the multi-year process and receive a U visa, they can eventually be eligible to apply for a green card.

Thinking About The Future

Lawyers in El Paso say only a few victims have come forward so far to express an interest in the U visa, but they expect that to change in the coming weeks.

Christina Garcia, with Las Americas Immigrant Advocacy Center, said for now, victims are focused on meeting their immediate needs, and still grappling with trauma from the shooting.

“I’m not sure that they’ve had the time to fully process what happened,” said Garcia. “And to sit down and think ‘okay, now what do I need to do to make sure that I’m in a place where I’m safe and not in danger physically, mentally, but also [not] in danger of being deported?’”

Rubén Reyes, an immigration lawyer and native El Pasoan, returned to his hometown from Arizona to help some of the survivors.

“What they needed was a lot of day to day support, maintaining where to stay, where to live, who’s taking care of kids,” Reyes said. “Those kinds of concerns.”

Reyes is back in Arizona now, but wants to continue supporting victims once they feel ready to apply for U visas. He wants them to think about the future, “Because tomorrows are going to come. It’s whether or not a tomorrow comes with a benefit for you.”

Nearly two years after the mass shooting in Las Vegas, Marta said a passing ambulance or police car can still transport her back to that day. But, she’s made substantial progress.

Her doctor decided to stop prescribing the sleeping pills she’d relied on since the shooting. And she’s looking forward to a future living in the U.S. legally. As soon as she receives a U visa, she plans to book a trip to her home country in Central America to visit her sons and elderly father. She hasn’t seen them in 16 years.

“I’m going to put some money in a piggy bank,” Marta said in Spanish, “so I have savings for the flight once that time comes.”

Luis Melgar is a Data Journalist for Guns & America. Mallory Falk is a reporter for KERA based in El Paso, Texas. With help from Natalie Delgadillo.

After Worrying He Would Mourn Alone, Hundreds Show Up To Support Husband Of El Paso Shooting Victim

Antonio Basco lost his only close relative in the mass shooting in El Paso, Texas. But he did not mourn her alone.

Basco’s wife of 22 years, Margie Reckard, was killed at the Walmart. He told the funeral home planning the service for his spouse that he wanted to invite members of the public to attend her visitation.

Hundreds turned out to the visitation Friday night to support Basco, grieve after tragedy and remember a woman many did not know.

Wednesday night, thousands of El Pasoans streamed into Southwest University Park, for a community memorial to honor the 22 victims of the mass shooting that took place just over a week ago, on Aug. 3.

Upon entering the city’s minor league baseball stadium, visitors were greeted by a group of therapy dogs who traveled from Nebraska to provide comfort.