The Northeast has long been home to firearm titans, but recently the region has lost out to the South and Mountain West as more and more gun businesses follow financial and cultural incentives to relocate.

And for those firearms producers still in states with gun control measures on the table, there’s increased temptation to take their business elsewhere.

The Center Of The Gun World

One week a year, Las Vegas becomes the center of the gun world. That’s when the National Shooting Sports Foundation’s SHOT Show comes to town, bringing with it roughly 60,000 buyers, sellers and even foreign government officials. And it’s here that the tension between shifting legislation and economic impact is on full display.

For the last 22 years, Las Vegas and SHOT Show have seemed a perfect pairing. But then in 2018, the relationship was tested: Nevada’s legislature put forward a suite of gun control measures.

The National Shooting Sports Foundation (NSSF), the gun industry’s largest trade organization, lobbied hard against the measures, but an increasingly Democrat-dominated state government passed most of the bills into law.

Leading the charge was Assemblywoman Sandra Jauregui, a Democrat who represents the Las Vegas suburbs. She’s also a survivor of the deadliest mass shooting in modern American history, when a gunman killed nearly 60 people at a Las Vegas music festival in 2017.

“A lot of people think of Nevada as the Wild Wild West still,” Jauregui said. “It still has that feel but overwhelmingly Nevadans support gun violence prevention laws. And gun owners do, too, because gun owners know that the biggest threat to them and their right to carry a firearm is irresponsible gun ownership and people who don’t follow the law.”

And they’re not done yet. Nevada’s considering a ban on so-called assault weapons. If it passes, SHOT Show has threatened to leave, taking the tens of millions of dollars it injects into the Las Vegas economy with it.

NSSF spokesman Mark Oliva said an assault weapons ban could stop 95% of showgoers from displaying their wares. It’s a fight that may play out next year when the legislature meets again.

“I think an ‘assault weapons ban’ would be absolutely devastating to the SHOT Show,” Oliva said.

Manufacturers On The Move

Nevada is not alone. In the aftermath of a mass shooting, many states have taken or promised legislative action, even those that have long been home to the giants of firearms manufacturing.

Remington Arms has been based in New York state for more than 200 years. But as that state has passed some of the most restrictive gun measures in the country in recent years, Remington has moved some manufacturing to the more gun-friendly location of Arkansas.

Next door in Connecticut, Stag Arms recently announced a move to Wyoming. Connecticut has passed a number of gun restrictions since Sandy Hook Elementary School Shooting in 2012.

And Oliva said a suite of gun control measures making their way through the Virginia Assembly is the latest worry for the industry. Those proposals brought more than 20,000 armed gun rights advocates to Richmond Virginia last month to protest.

“When you start to look across the landscape of threats to the industry, the states are really where we have our concern,” Oliva said. “I think Virginia right now is the bellwether.”

Jurgen Brauer, founder of Small Arms Analytics, says gun manufacturers have, indeed, been on the move for quite some time, but that the factors are likely a complex mix of economic incentives and culture.

“While the industry has occasionally argued in the statehouses and senates, ‘We will move out of the state unless you become gun-friendly,’” he said. “The fact of the matter — there’s some truth to it, but not the whole truth.” 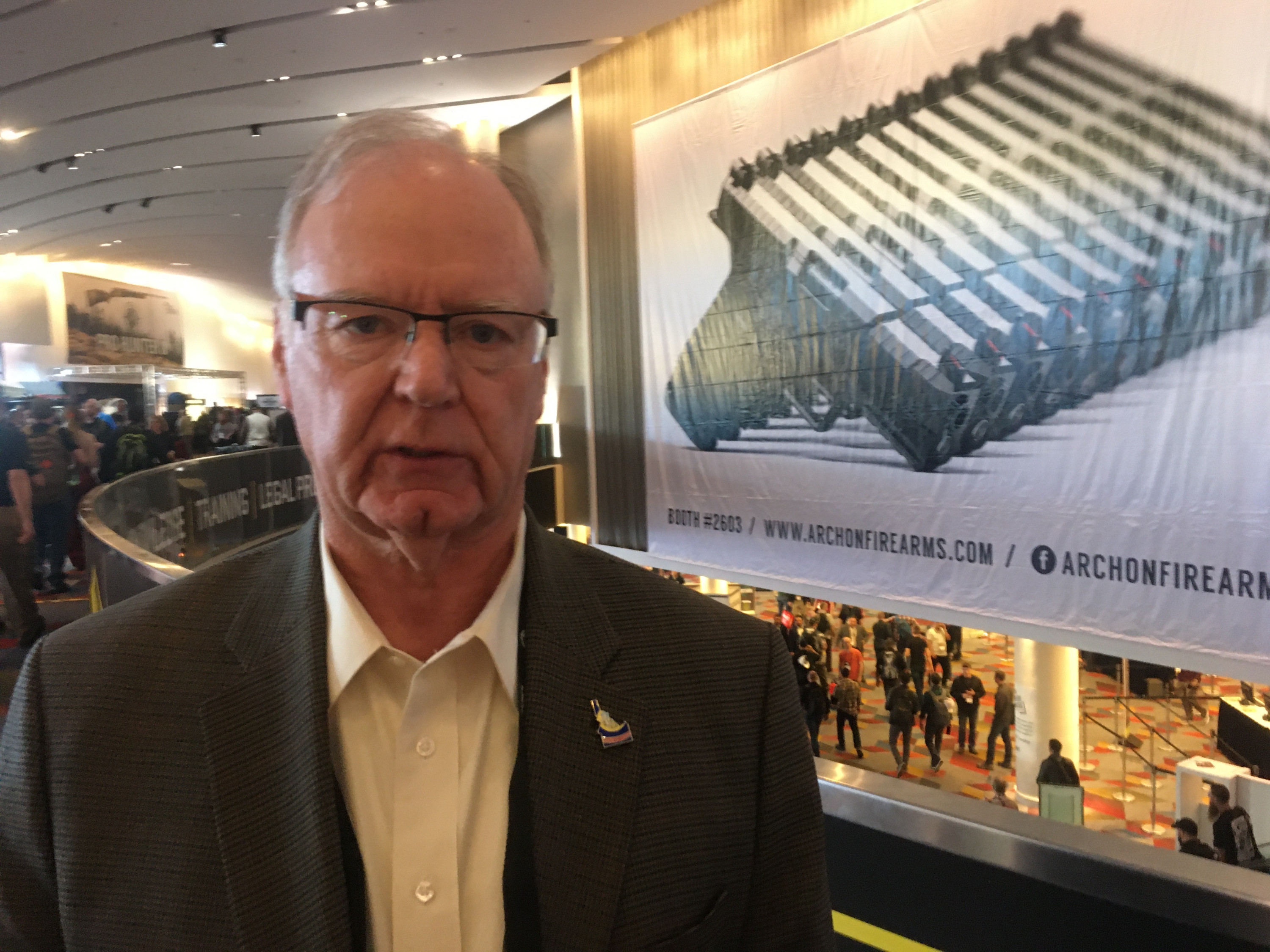 Idaho Department of Commerce Director Tom Kealey speaks in January at SHOT Show, the gun industry’s largest annual expo. He and other Idaho officials have been wooing the gun industry in a bid to get a bigger slice of the multi-billion dollar industry.

Some Red states aren’t just waiting around for their slice of the multi-billion industry. Idaho is actively courting businesses looking for a gun-friendly home.

As much of the country pass gun restrictions, states like Idaho are stripping away nearly all of their gun restrictions. Idaho Gov. Brad Little was one of at least four governors in Vegas for SHOT Show this year.

Speaking at a gun range event for state lawmakers in Meridian, Idaho, Little says it’s easy to sell the state to gun manufacturers:

“Most of their employees hunt and fish and are recreational shooters and just feel more welcome here than some of those other states,” he said.

The wooing is working.

In the past few years, several gun and ammunition manufacturers have either relocated or expanded operations in Idaho. Idaho Department of Commerce Director Tom Kealey also went to SHOT Show and said the state is hoping to add even more companies to the relocation list soon.

“Without naming names I think we have three or four very serious interested parties that are looking to come from Washington, California and Colorado,” he said.

One of the companies that has already made the move is multinational firearms manufacturer Caracal. In 2016, they opened their American manufacturing plant in Boise.

Caracal USA’s president, Jeff Spalding said Idaho wasn’t even on his radar until Little’s predecessor, Gov. Butch Otter, and other state officials, cornered him at SHOT Show a few years back to sell him on the state.

“When the [Idaho] Department of Commerce team came by and asked if we would be interested in setting up shop in Boise, it never once crossed my mind,” he said, “but I put it on the list simply because they took the time to come here and show support in that way.”

“I was born and raised in Maryland and I watched Maryland go from a very pro-[Second Amendment], Republican-run and industry supportive government to deteriorate to the point where Beretta was forced to leave,” he said.

Beretta USA is a subsidiary of the Italian firearms titan Beretta. It moved to Tennessee in 2014 after Maryland passed a gun control bill that included a ban on many semi-automatic rifles, like the AR-15, and high-capacity magazines.