Several children at the Langston Lane Apartments in Southeast Washington, D.C., saw the body of 15-year-old Gerald Watson after he was chased down by two assailants, shot and killed in December.

The shooting happened just a short walk away from the TraRon Center after-school program, a community anti-gun violence resource and refuge to some two dozen children, which is housed in the same apartment complex where Watson lived and was killed.

The circumstances of the high schooler’s death — having been chased down and shot 17 times in the stairwell of his apartment — were especially unnerving for neighborhood residents, but served as an unfortunate reminder of the routine nature of violence in the area.

More than 3,500 children and teenagers in the United States were injured or killed in firearm incidents last year, according to data from the Gun Violence Archive. These sort of incidents have fallout far beyond the immediate damage of the bullet, including the lingering trauma of friends and classmates dealing with the violent death of a peer.

In the District of Columbia, 160 people, including 13 minors, were killed last year. A majority of these homicides occurred east of the Anacostia River, where Langston Lane Apartments is located.

“The kids, they want to go outside and play, but they know they can’t. Not yet,” said Marilyn Wiggins, a volunteer at the TraRon program and grandmother to several children who live in and around the neighborhood.

Gunfire is a familiar refrain in the area, Wiggins said, estimating that sometimes she hears shots fired every night.

But the shooting death of Watson, a high school freshman and role model to many of the young boys at the TraRon Center, had a sharp impact on neighborhood children, who are now struggling with the trauma of losing one of their own. 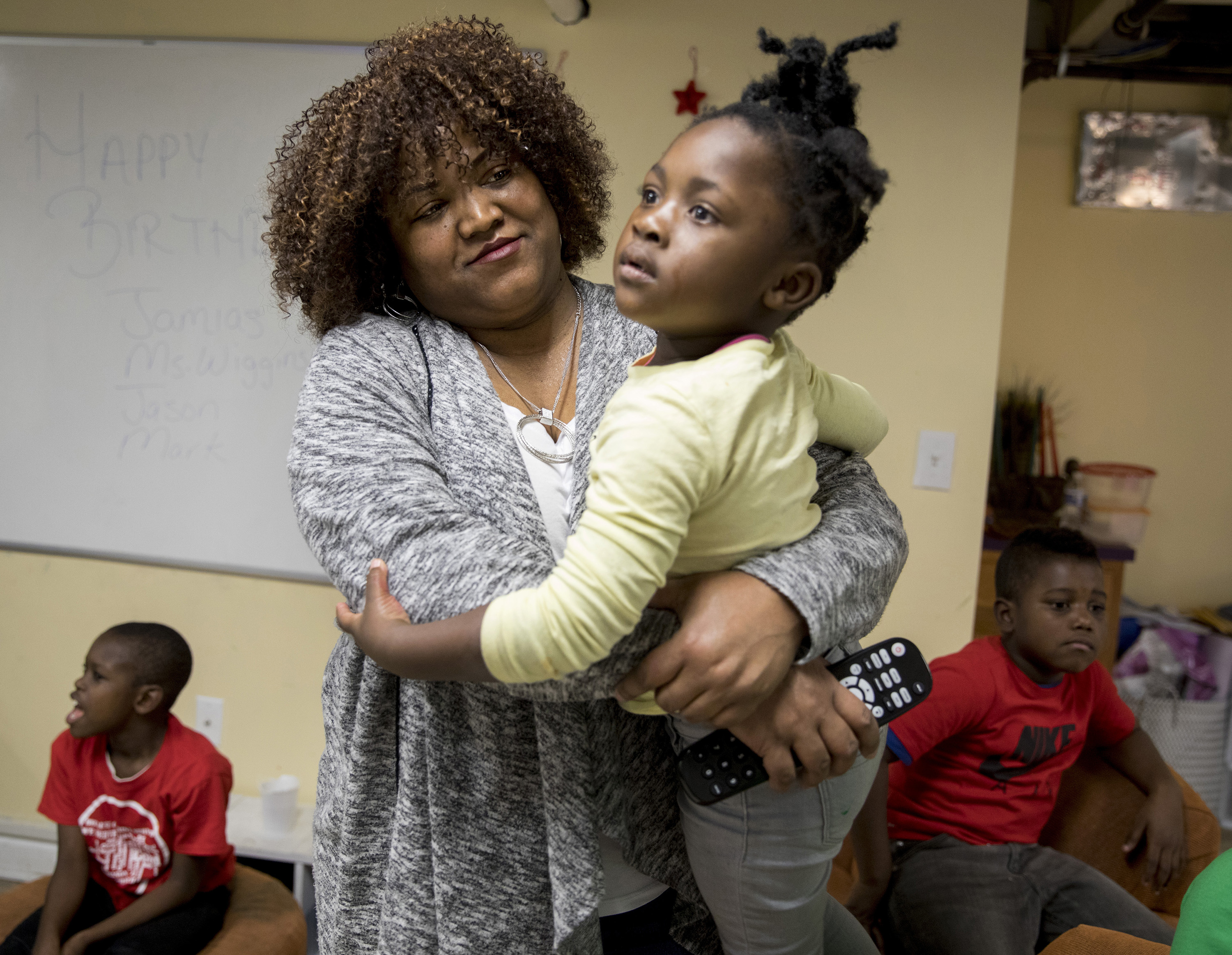 ‘Things Do Not Feel Safe’

Ryane Nickens launched the TraRon Center’s after-school program in 2018 as a space to help children work through their experiences with gun violence through art and therapy.

The program was modeled after her own experiences with gun violence, including the shooting deaths of two siblings, Tracy and Ronnie, for whom the program is named.

“It’s affirming who they are and where they can go, and making sure that they know that they are loved. And that love just doesn’t come from mom and dad or their family, but they have a community,” Nickens said.

“(We) affirm in them that they can do this. Where they are now is just a place to live.”

Even before the shooting, the program incorporated art and group therapy to help the kids, mostly elementary and middle school-aged, deal with the trauma of what Nickens called “generational gun violence.” But in the months since Watson was killed, Nickens and volunteers there say they have seen more unpredictable bursts of rage, sadness, and anxiety from the students. 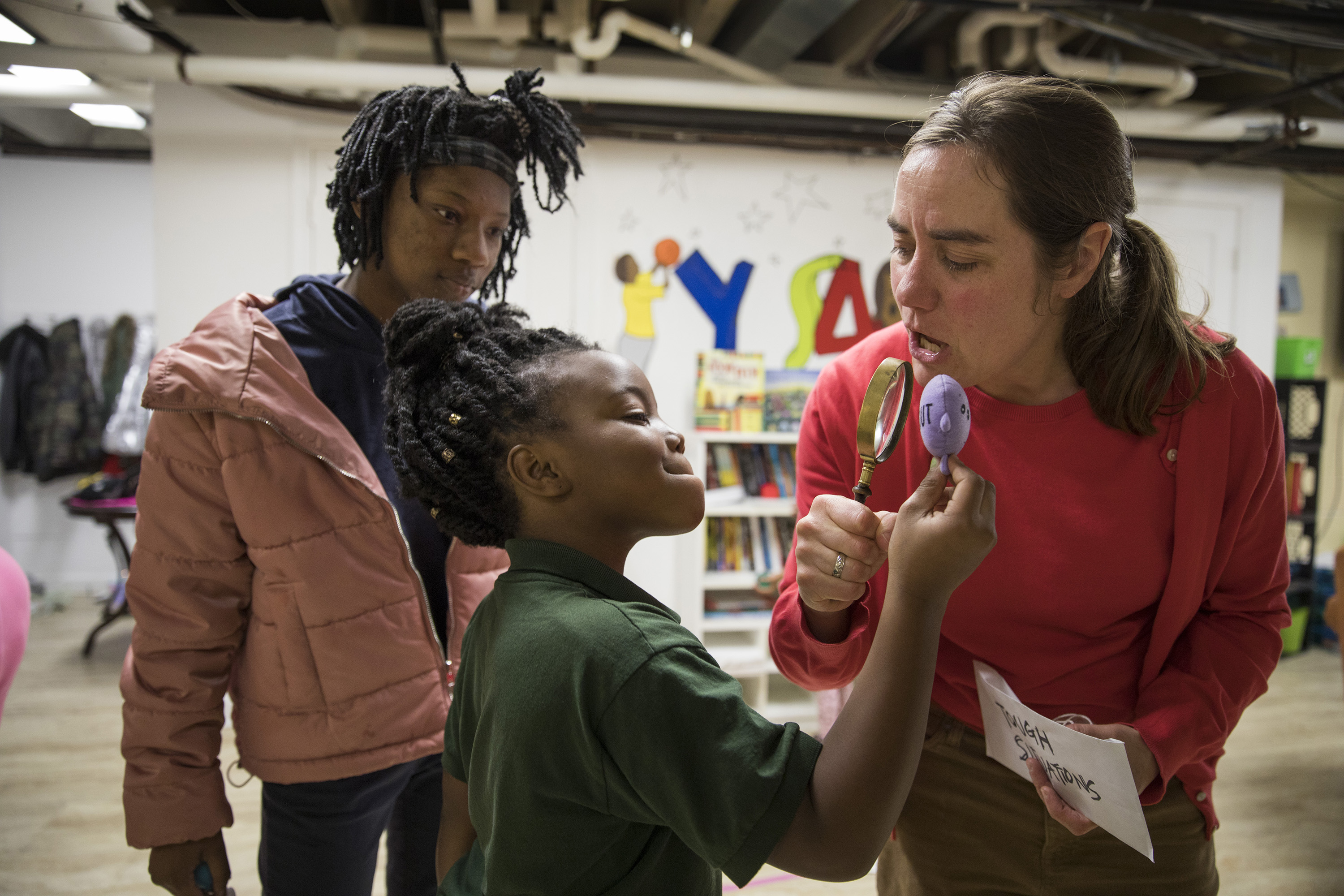 Dr. Meg van Achterberg, a child psychiatrist, works with Amari Lyles, 9, in order to “investigate” and talk about hard feelings. In the background is Arnaye Wiggins, 13.

“There is a tendency to hit first ask questions later. Protect yourself, first and foremost,” said child psychiatrist Dr. Meg van Achterberg, who holds weekly pro bono group therapy sessions at the center to help the kids work through their individual traumas.

“It’s like they’re living in a war zone, and things do not feel safe. It does not feel safe to walk around in the neighborhood. It feels like bad situations, danger, violence can happen,” van Achterberg said. 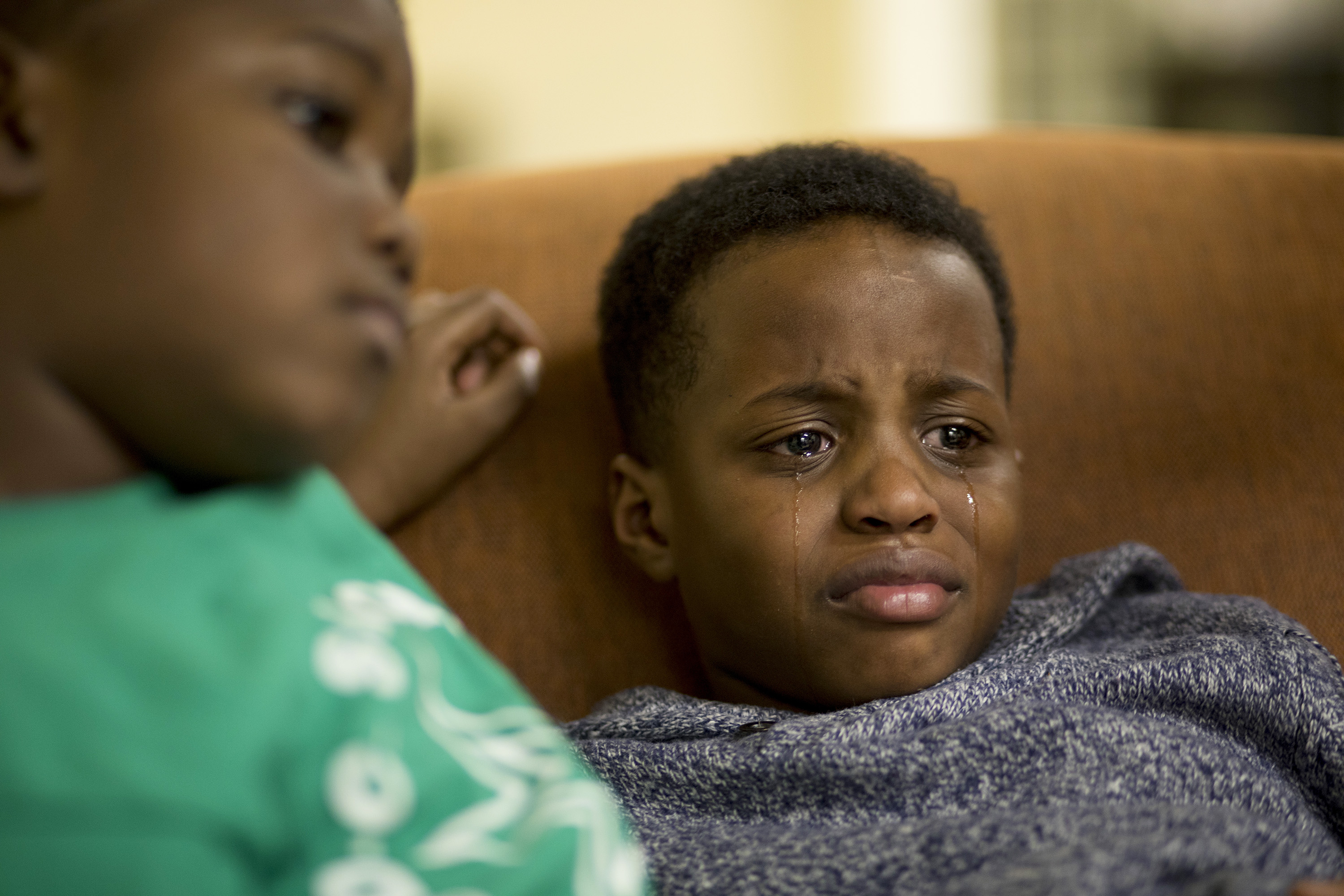 Ashton Middleton, 8, cries after a disagreement with another youth in the program. After defusing the situation, Ryane Nickens talked to Ashton until he felt better.

Since the shooting, several children at the center have reported having trouble sleeping. Wiggins, the program volunteer, said one of her grandsons has started questioning the concept of his mortality. 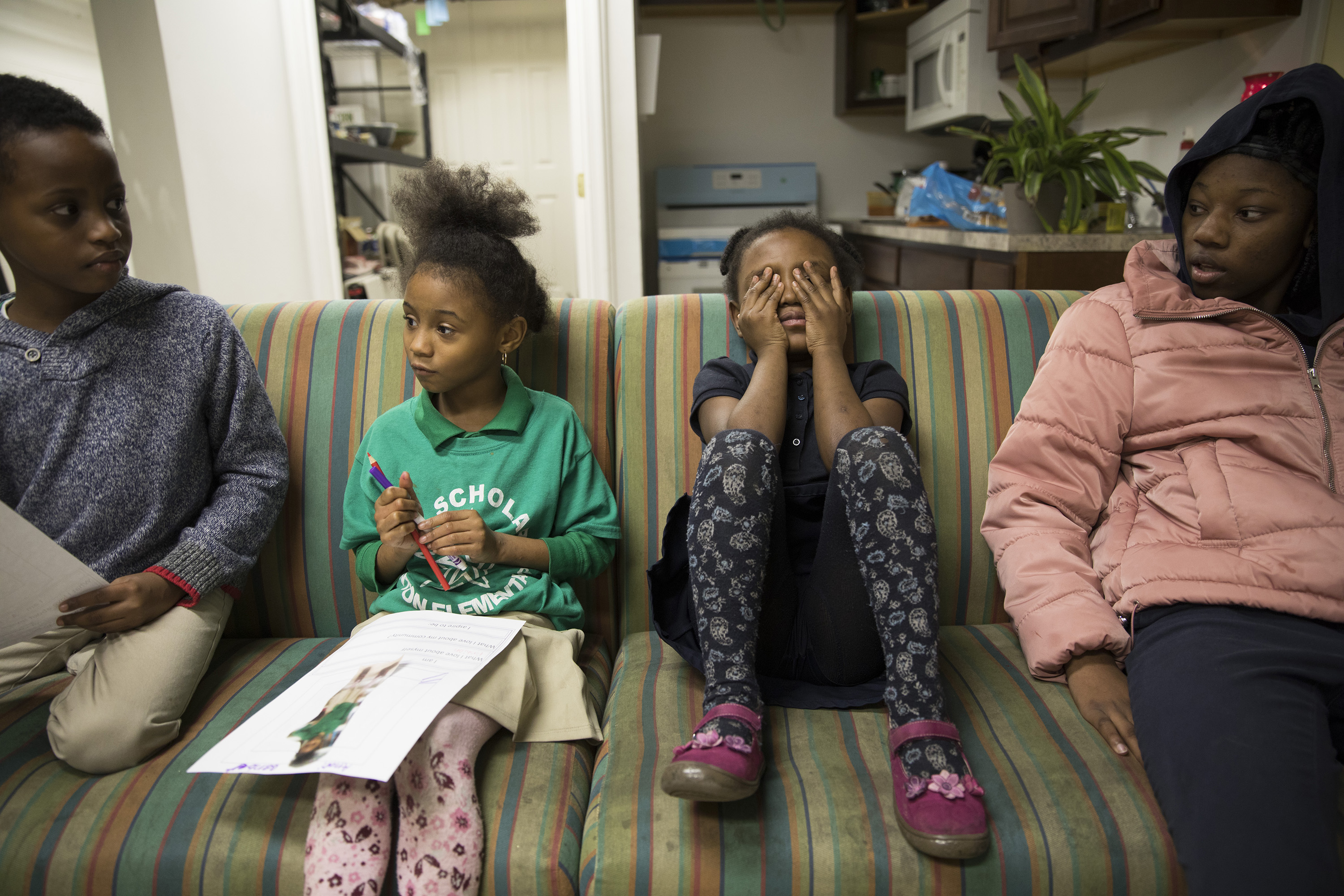 From left, Ashton Middleton, 8, Anari Bender, 6, Brianna Bender, 6, and Arnaye Wiggins, 13 participate in a discussion about how they view themselves.

Lisa Jaycox, a clinical psychologist at the Rand Corporation think tank, said these kinds of responses are common in trauma survivors and can often develop over time into depression or post-traumatic stress disorder.

“Kids have just the same kinds of reactions as adults,” Jaycox said. “There’s some subtle differences, but really the same kind of thing that you might see in a combat veteran, you can see in a five-year-old.”

Jaycox said these issues often go untreated due to the difficulty of procuring mental health services in the United States. She said a key component is introducing specific interventions into schools to try to catch young people’s symptoms before they worsen over time. 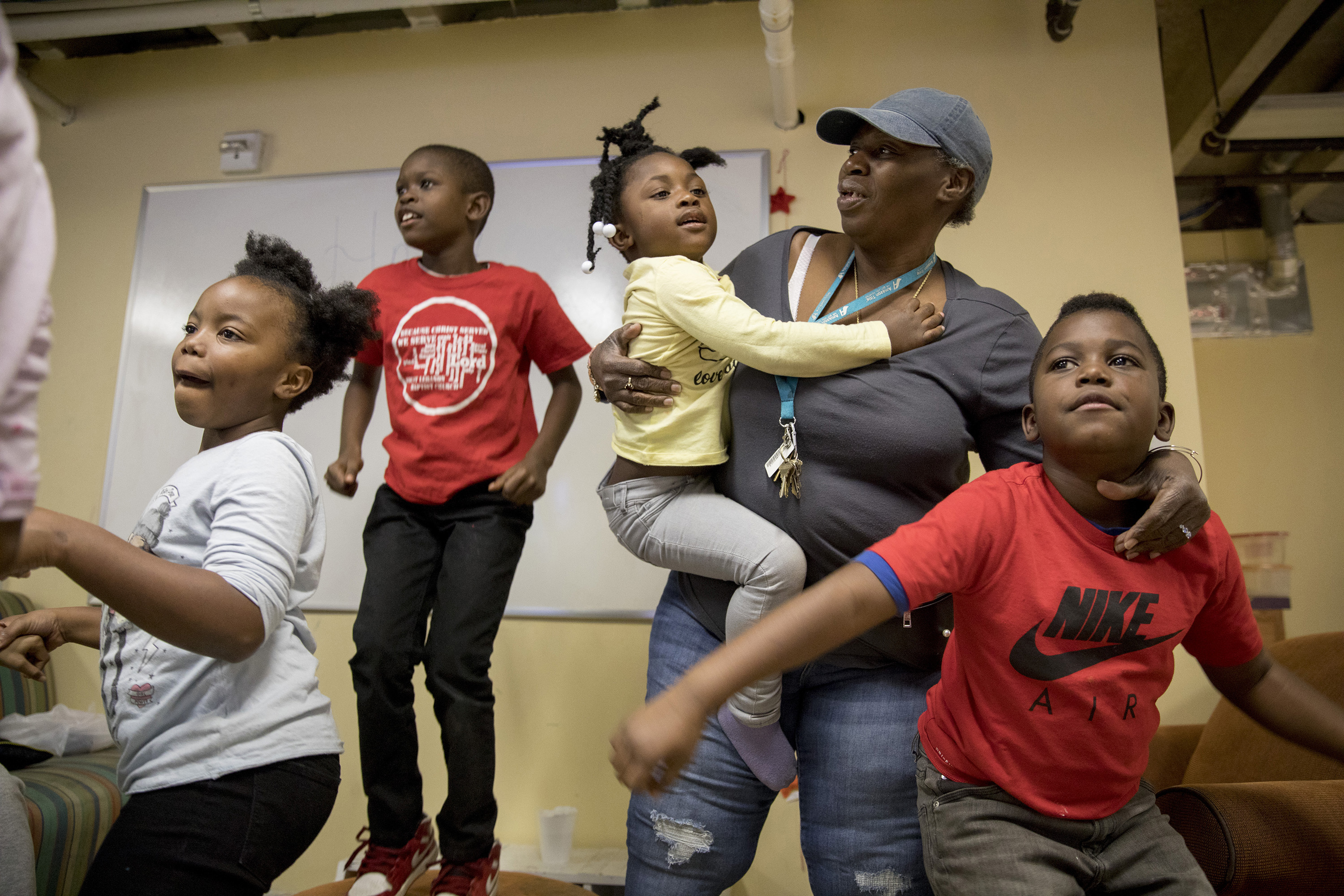 Marilyn Wiggins, second to right, volunteers at the TraRon Center and is grandmother to several of the children. Here they are celebrating her birthday party. From left is Amari Lyles, 9, Braelyn Davis, 9, Zoey Young, 4 (in arms of Ms. Wiggins), and Jamias Davis, 7.

Nearly one in five children have a mental, emotional or behavioral disorder in a given year, according to the American Academy of Child and Adolescent Psychiatry. Only about 20 percent of those children receive the appropriate mental health care.

“This kind of event where someone was unfortunately killed in front of other kids and teens is the kind of thing that everyone notices,” Jaycox said. “But unfortunately a lot of people experience these kinds of events in a way that isn’t so visible.” 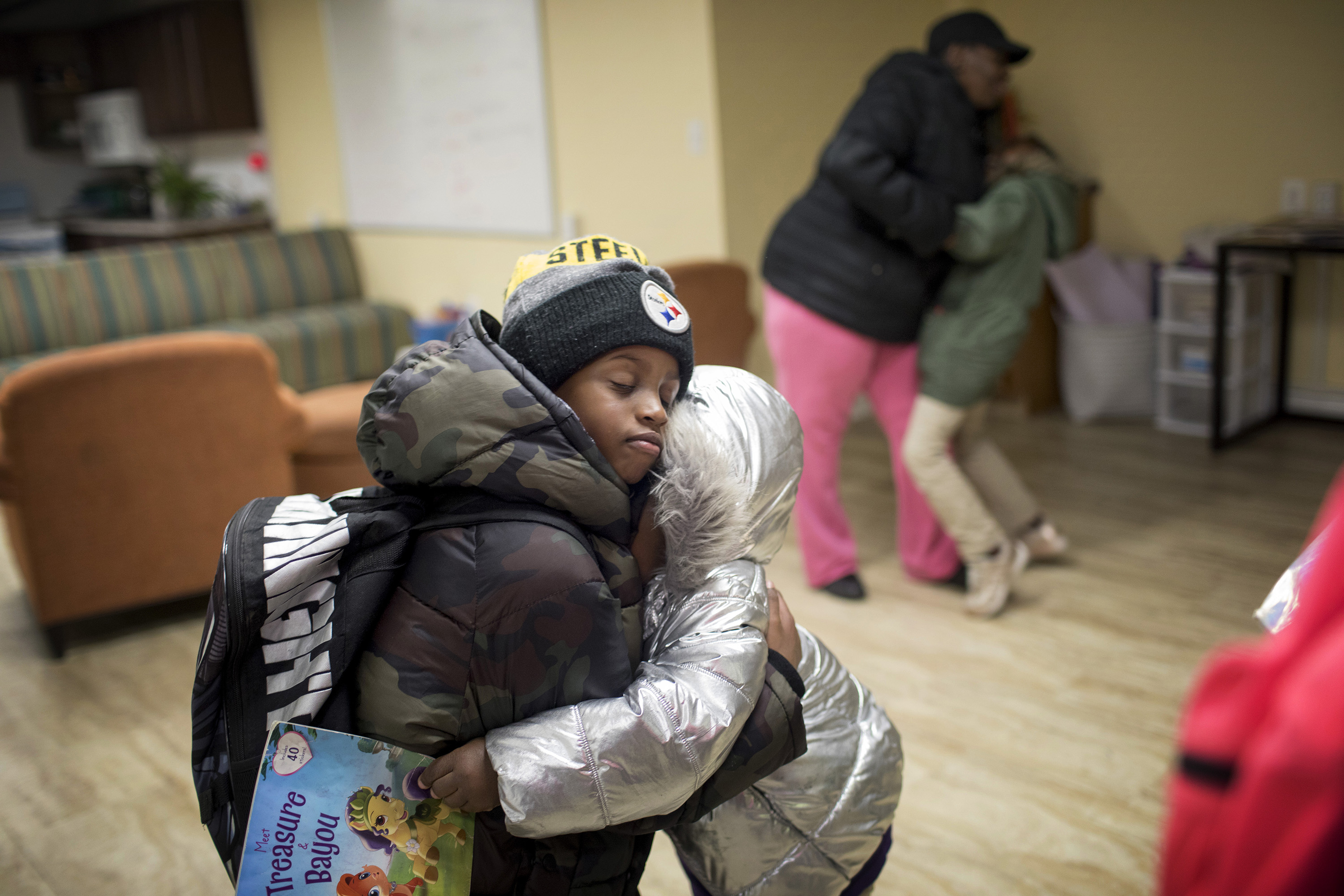 Lockdown drills have become increasingly common in schools across the United States. Though drills differ from school to school, they usually require students to crouch in a corner of their darkened classroom, away from the door, and stay quiet until the teacher says it is okay to start talking again. Students start practicing these drills as early as pre-school, before they can truly understand what threat they are hiding from.