Democrats in Virginia claimed big wins in the Tuesday election, fueled in no small part by big investments from gun control advocates.

The historic blue wave marked the first time Democrats seized control of the state’s government in a generation.

Groups like Brady and Everytown for Gun Safety hailed Virginia’s election results as a win. A $2.5 million spending blitz by Everytown outspent the National Rifle Association in its home state by a ratio of eight-to-one, according to CNN.

While guns and the Second Amendment routinely top voters’ priorities in opinion polls, the shooting spree at a Virginia Beach Municipal building in May pushed the issue to the top of many local voters’ minds. 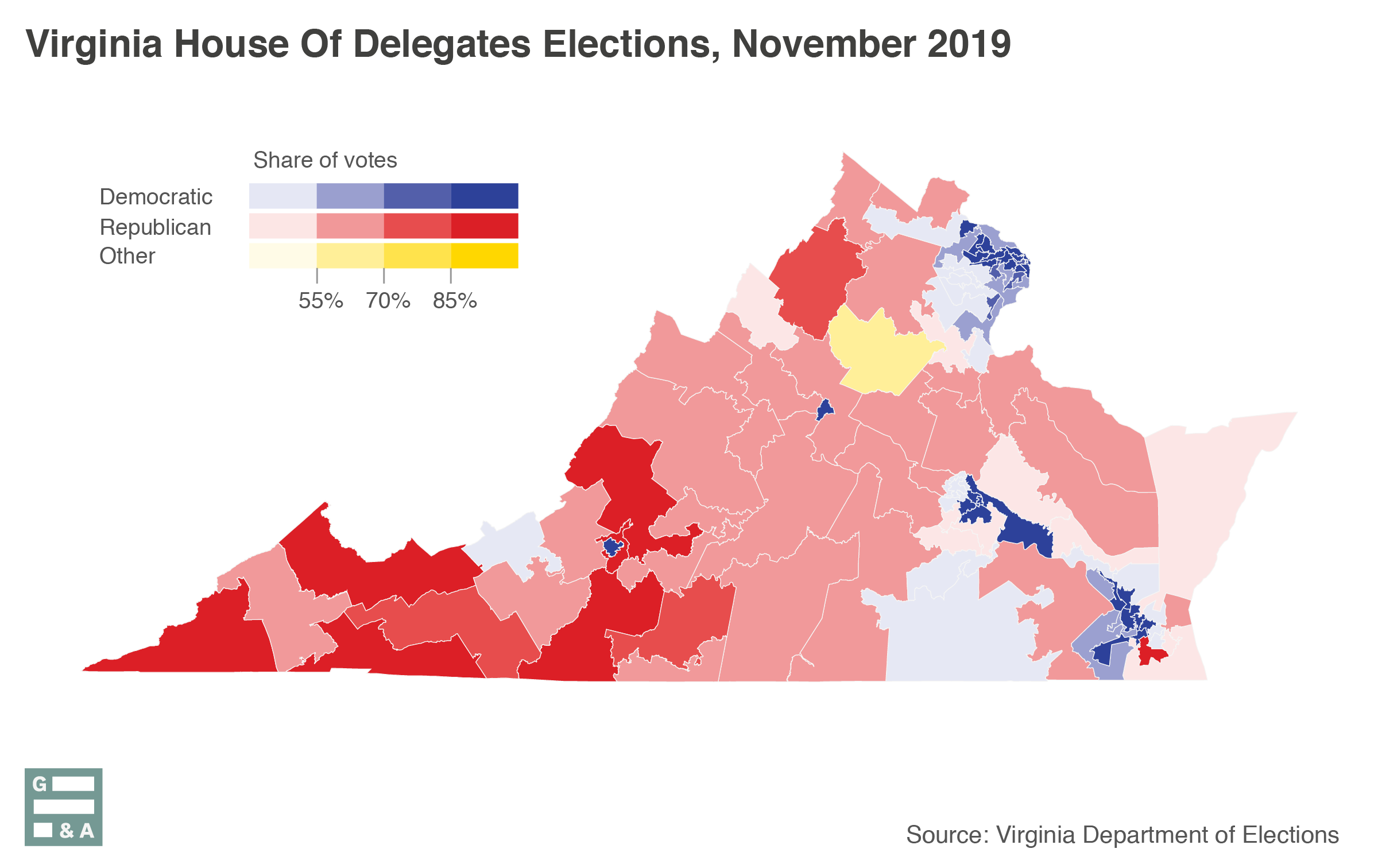 And the state’s Democratic governor, Ralph Northam, said he would re-introduce gun legislation he first proposed after 12 people were killed in a workplace shooting in Virginia Beach, Virginia, earlier this year.

“Getting rid of bump stocks, high volume magazines, red flag laws,” Northam said Wednesday. “These are common-sense pieces of legislation. I will introduce those again in January. And I’m convinced, with the majority now in the House and the Senate, they’ll become law and because of that, Virginia will be safer.” 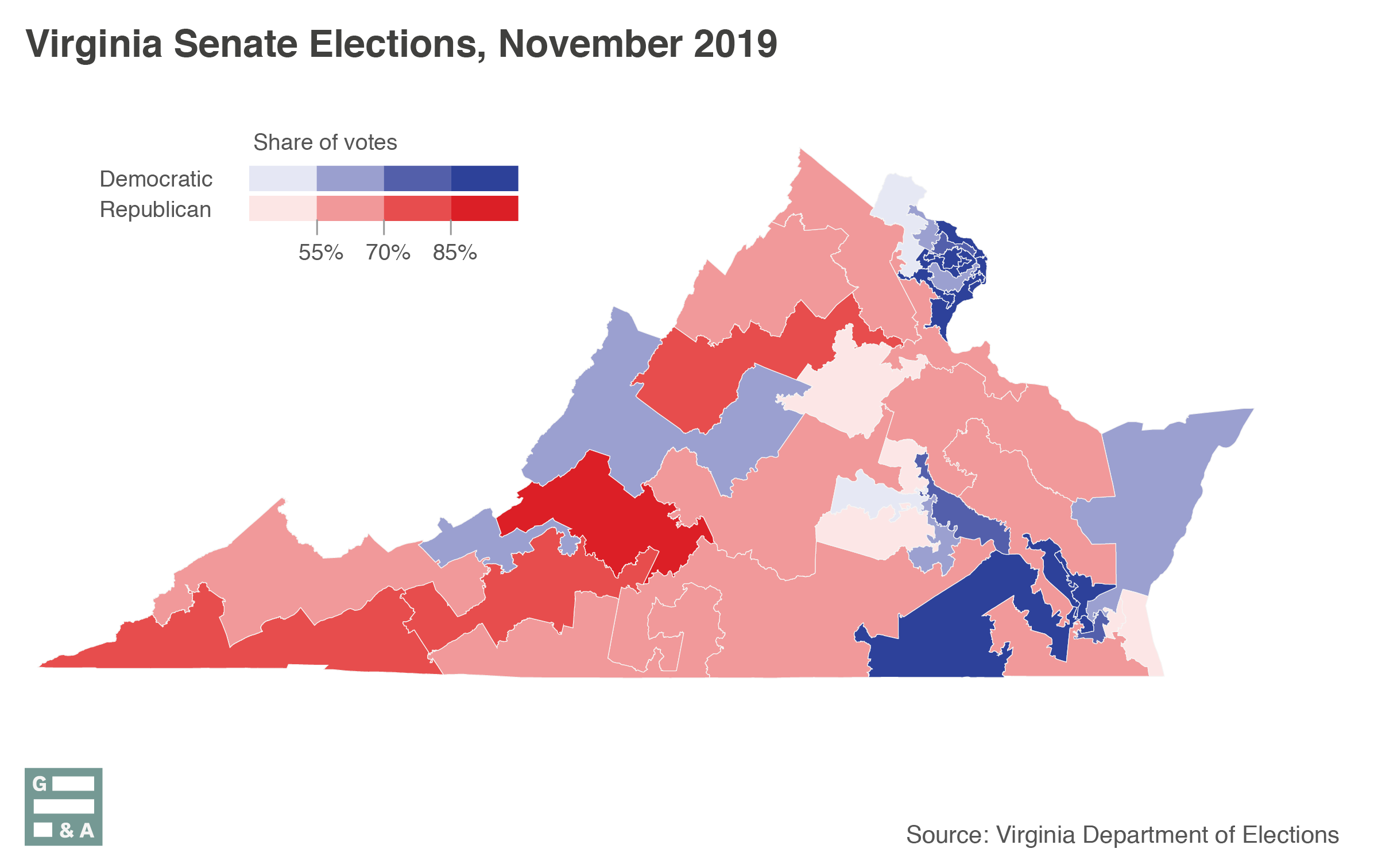 Results From The Tuesday, Nov. 5, 2019 Election: Democrats flipped key districts in Virginia and took control of both the Senate and the House of Delegates. This map of Virginia shows what party won the election in each of the 40 State Senate districts.

According to a Washington Post-Schar School Virginia poll from September, guns and the Second Amendment top voters’ priorities.

Larry Sabato is a political analyst and director of the University of Virginia Center for Politics.

“Some of the pre-election polls made it pretty clear that Virginians did prioritize gun control, mainly because of the shootings in Virginia Beach and I’m sure the after effects of shootings in other states,” said Sabato. “But the Virginia Beach shootings brought it right down to home.”

Sabato said that if gun safety groups want to see another blue wave in next year’s primary and general elections, they’ll have to make similar investments for Democrats on the national level.

A Nov. 2 Gallup poll found that 72% of midterm voters rated gun policy as extremely or very important in this year’s voting contest.

“If they really care about getting gun control legislation passed, they have no alternative,” said Sabato. “They’ve got to turn out at the polls in large numbers. And they know what they have to do and who they have to vote for.”

In spite of the polling, out at the polls on Tuesday, several voters in reliably blue Northern Virginia said that gun policy wasn’t weighing on their mind.

But those same voters did say that it would play a major role in how they would choose to vote in the presidential election next year. Voters like Lori Stueve of Prince William County:

“I feel like we just need to have some really good gun gun legislation to protect our families and our children,” said Stueve. “That’s the most important thing. Let’s think about how we can do that in a way that we can all agree. It’s very simple. Let’s just do it.”

From Toxic To Staple: Gun Control Is Now Front And Center On The Campaign Trail

The politics of guns on the national stage are changing. Fast. And when Democratic presidential hopefuls got together in Las Vegas earlier this month to discuss gun policy the shift was crystal clear.

Instead of running away from the issues, as the Democratic Party has for years, many of the candidates tried to one up each other on their gun control cred.