For Some School Staff, Back-To-School Means Back To The Shooting Range

Instructor Graham Dunne is holding up some printouts with faces on them. He tells his students they’re smaller than real heads.

“Here’s some useless knowledge from being a sniper,” he says. “The average human head is 6 inches across by 10 inches high. These are probably half that.”

“Just to make it simple, pick one of the big heads to shoot. That’s your target,” Dunne tells them as they take their positions on the 3-yard line. 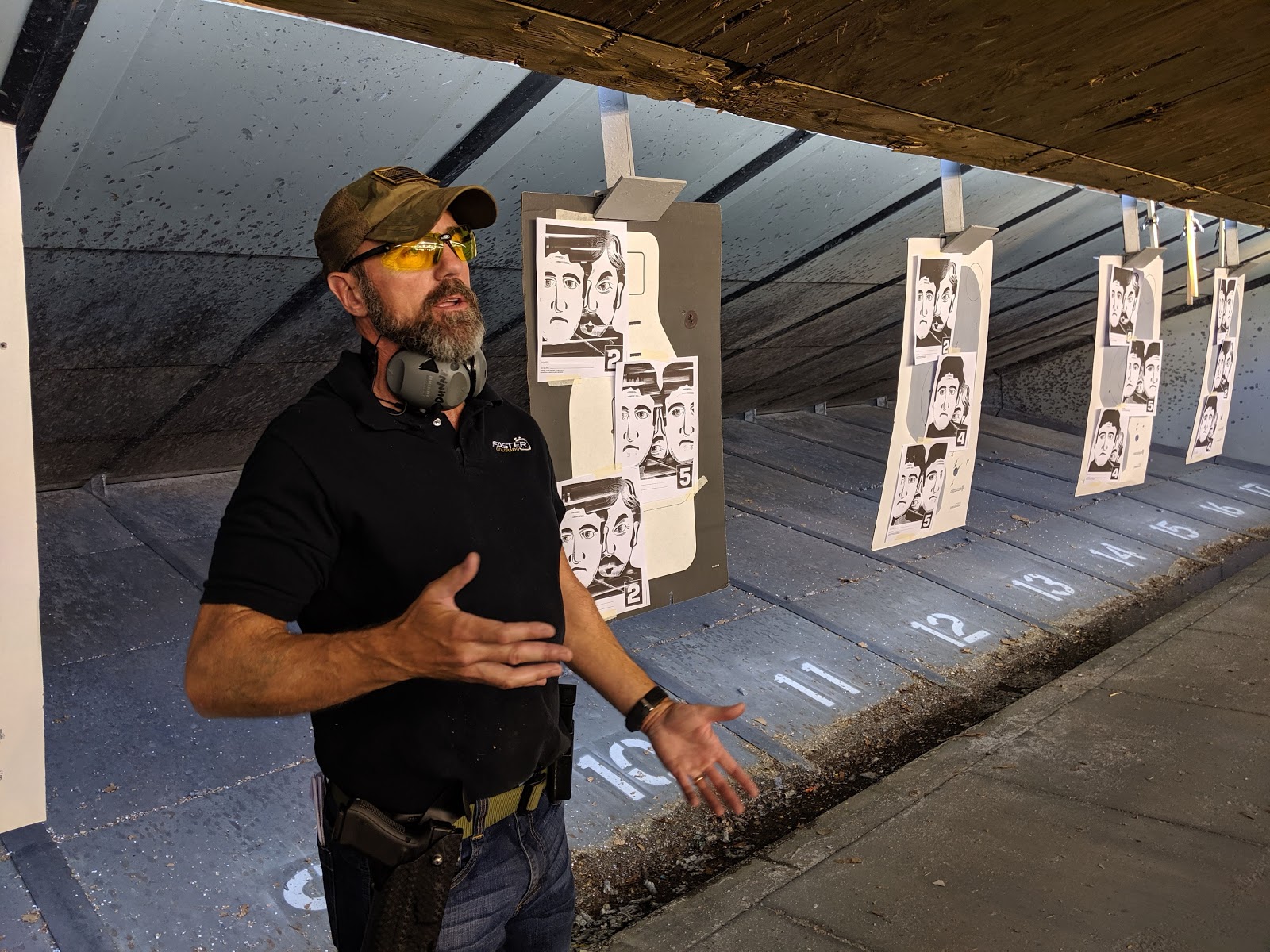 “One thing I find amusing about educators is they have such test anxiety,” says instructor and former SWAT sniper Graham Dunne. Most Colorado school staff have to meet — or exceed — law enforcement standards in order to carry concealed weapons on campus.

The trainees are holding 9mm pistols, mostly Glocks, which Dunne calls the Toyota Corolla of guns. They’re about to use them to blast their targets. Dunne shouts out some scenarios.

“All right here we go, you know the drill,” says Dunne before yelling, “Put your hands up! Don’t move!”

The trainees echo his words in unison.

“He’s lifting up his shirt, he’s pulling out a gun,” says Dunne, his voice getting louder. “Three rounds, fire!”

Next, the imaginary aggressor will have a knife instead of a gun. He gets the same treatment. So does the imaginary person pulling a gun out of his backpack. 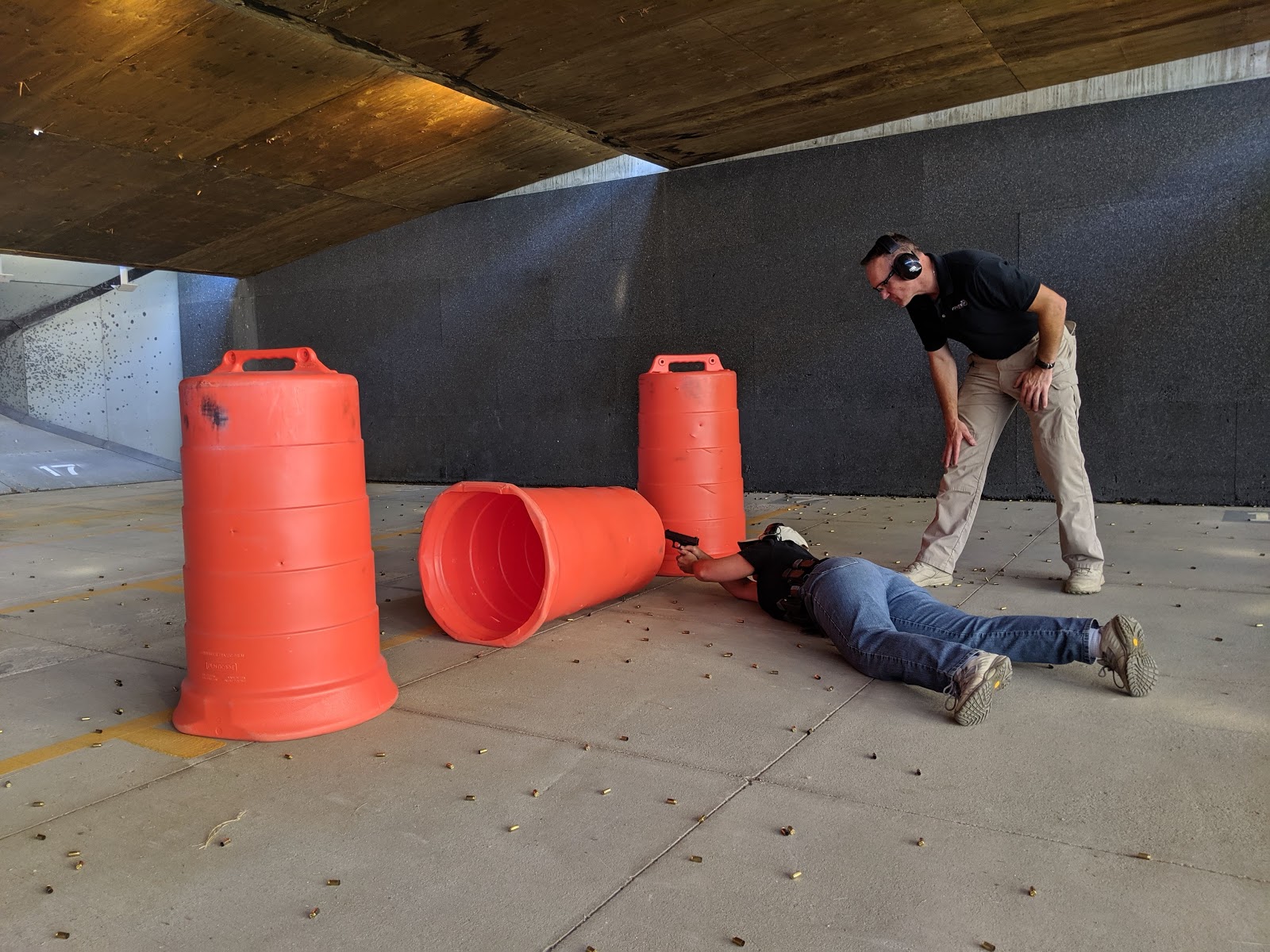 Trainees practiced shooting from a variety of protected positions.

The training program is called FASTER Colorado, short for Faculty/Administrator Safety Training and Emergency Response. According to Laura Carno, the program’s executive director, about 200 school staff have gone through the program mostly coming from 34 school districts across the state.

In many states, it’s up to the school districts to decide whether staff can carry concealed weapons and what training they have to go through. That’s the case here in Colorado and according to the Colorado School Districts Self Insurance Pool, at least 35 school districts — plus two charter schools — allow it.

At today’s workshop, one teacher has a bandaid on her hand, from slamming in fresh magazines. Looking through her bag, she guesses she’s used 700 rounds this weekend. She doesn’t want to be named because she says a school shooter might target her. That’s an opinion shared by a lot of people in this class.

But Karl Donnelson agreed to talk — he’s already been named in past news reports. The science teacher says it would take almost half an hour for the sheriff to arrive at his small-town high school.

“My own kids are there and I’m not going to stand there and throw a book at someone who’s trying to kill our kids. That’s just the fact of it,” he says. “And most of these gun fights are over in 2 or 3 minutes and we can’t sit around and wait for police to get there.” 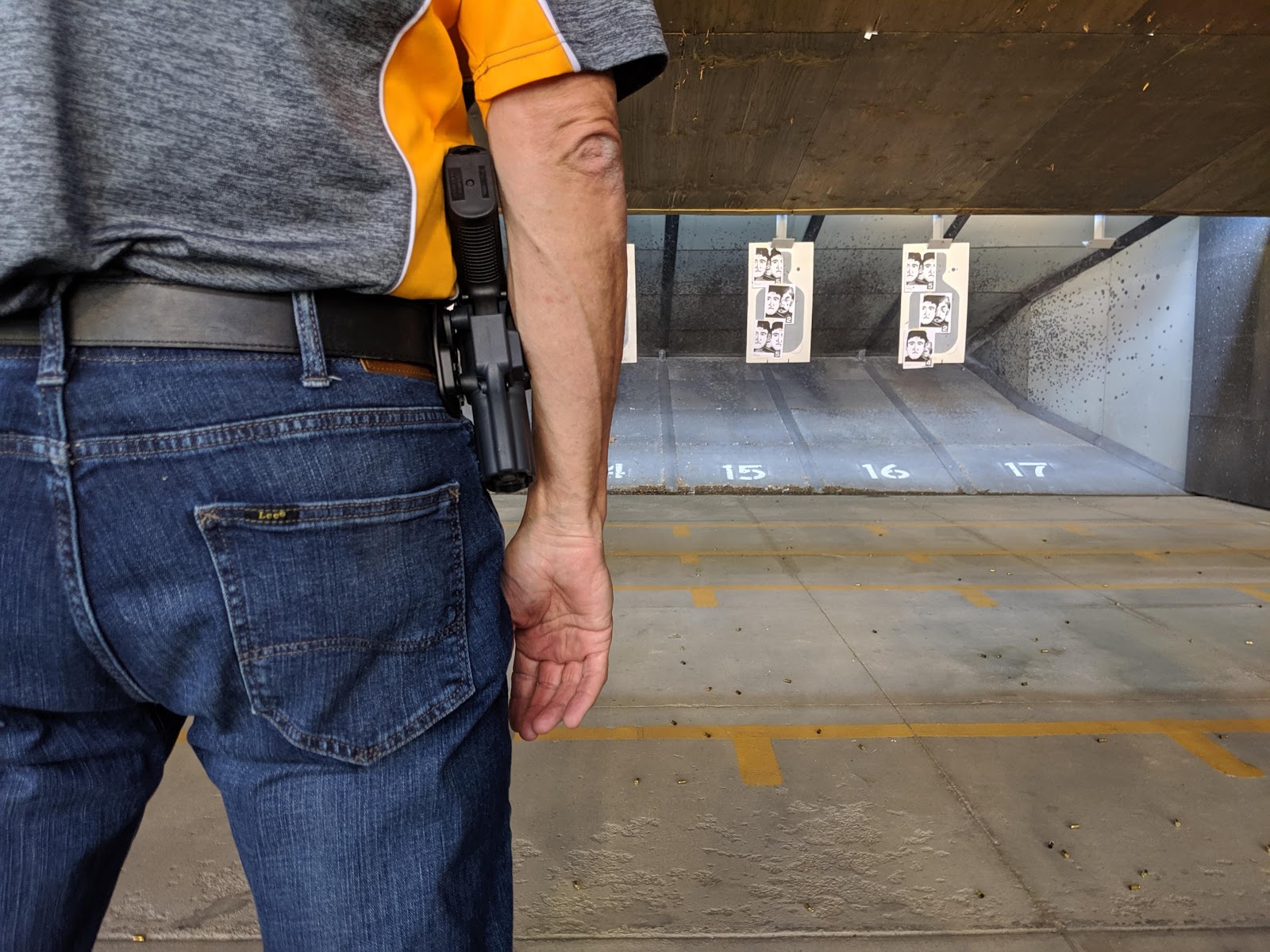 An educator on the firing range at the Flatrock Regional Training Center in Commerce City, Colorado.

According to a report by the Education Commission of the States, there are 24 states, including Idaho, Montana, Nevada, Utah and Wyoming that explicitly authorize school districts, school boards, and/or individual schools to regulate or permit weapons in schools. According to an analysis by Guns & America, those states are among a broader group of 31 states which might not have state laws that explicitly address the issue, but where the decision about whether to arm staff, and how to train them, still falls to the school districts (or in the case of charter schools, to the individual school). 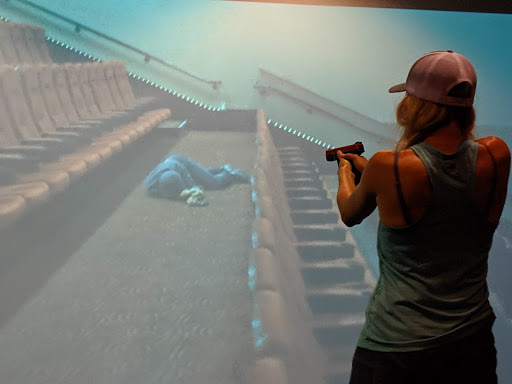 In the Forced Option Simulator, trainees like this Colorado teacher took down an active shooter in the school auditorium.

Donnelson says he went through a psych evaluation, got his concealed-carry permit and went through a few trainings including a version of this one last year. This is Level 2, a refresher course required by his school district.

Donnelson and the rest of the trainees are about to wrap up lunch and divide into two groups.

“Five plus two is seven,” mutters one teacher as he counts off one group before entering a room labeled the Forced Option Simulator.

“This is a simulation gun,” saysinstructor Paul Gregory as he holds up a plastic pistol. “The only thing that moves is the trigger.”

A video projection is about to take over one wall of the dark room. Gregory explains that it’s responsive, like a video game. The people in it, he says, will respond to verbal cues and gunshots.

“All right,” says a trainee as he steps up in front of the wall. The man is a school administrator. Gregory tells him what to expect.

The projection turns the wall into a school hallway. People are yelling, there are gunshots being fired. Students run down the hallways. One is clutching his arm. Someone wails “Why?” in the distance.

We round the corner into the auditorium. It looks a lot like a movie theater. It’s quiet and it seems empty, except there’s a body crumpled between the seats. The trainee is pacing, shifting his weight from foot to foot, shoulders tense. And then the shooter stands up.

The shooter points a gun at the trainee, but the trainee does the same, firing four times. The shooter goes down and the auditorium fades back into a wall.

“Ok,” says Gregory, as he and the other instructors review the footage. “Here’s shot number one. He surprised you. Shot two, three, four.”

Only one of the four rounds actually hit the shooter.

“In the wall,” says the trainee.

And what’s behind the wall? The instructors have some bad news. It’s the preschool, they say. And how many misses like this are acceptable, they ask? The answer, of course, is: None.

Reporting by Rae Ellen Bichell of Mountain West News Bureau. This story was produced by the Mountain West News Bureau, a collaboration between Wyoming Public Media, Boise State Public Radio in Idaho, KUER in Salt Lake City, KUNR in Nevada and KRCC and KUNC in Colorado in partnership with Guns & America, a public media reporting project on the role of guns in American life.