To Fort Collins in a covered wagon: How the Cordova family and their century-old adobe home shaped Colorado history

In the early 20th century, the sugar beet industry was a major economic empire along the northern Front Range. It drove population growth and the development of homes and neighborhoods that are still around today. At the heart of that population growth were people from Mexico and Germans from Russia, coming to work in the beet fields and factories.

To the northeast of Old Town Fort Collins, in the heart of the industry, three sugar beet neighborhoods were settled in the late 19th and early 20th centuries: Buckingham, Andersonville and Alta Vista — each with distinct communities and even architectural styles. And while Hispanic settlement did influence the predominantly German-Russian neighborhoods of Andersonville and Buckingham, it primarily took hold in Alta Vista, which was established as a nearly-all Hispanic or Latino colony in 1923.

The majority of the homes in Alta Vista were built from adobe, and according to a 2004 report funded by the State Historical Fund, the Alta Vista neighborhood in Fort Collins once housed one of the northernmost collections of domestic adobe architecture in North America.

One of these adobe homes still standing today was built in 1921 by Jose Dolores-Cordova and his family, who have been a part of Northern Colorado and Fort Collins history ever since. Ashley M. Cordova, the great-granddaughter of Jose Dolores-Cordova, tells us about her family's arrival to this part of the world, the historic adobe structures they built, what it was like growing up there, and how the Cordova family has shaped the story of Fort Collins since.

Henry Zimmerman
I host and produce KUNC’s in-depth, regional newsmagazine Colorado Edition, which has me searching across our state for peculiar and impactful stories to bring to listeners, always with a focus on empowering the people who hear our show and speaking through them to our guests. I am also a big nerd about field recording and audio editing, my dedication to which I hope serves our listeners who care about audio as much as I do.
See stories by Henry Zimmerman 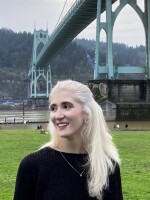