New York rapper Roc Marciano, riding a wave of acclaim for his second solo album, Reloaded, is moving into a position usually awarded to musicians with platinum plaques on their walls. The work he's produced over the course of his career, while critically respected, hasn't resulted in huge sales, but his opinion is valued enough that a small Virginia label sought him out. Roc has recently taken the position of Vice President of A&R for Man Bites Dog Records and is now responsible for quality control and the signing of new acts.

I spoke to Roc and Man Bites Dog founder Ryan "RML" Lynch earlier this month about his new role, one in which he seems to have an angel on each shoulder: the businessman trying to move product on the left, and, on the right, the passionate artist who says "I'm still trying to make music like I'm not worried about money."

He's not going in cold, having A&Red his own albums and come up with two of the best hip-hop A&R guys ever, Schott Free and Matty C. He says he learned from them, but he's still learning.

"There might be things that are not my taste necessarily, but it may be someone else's, and I can see the value in it," Roc says. "I always have to see the vision. And a vision of an artist isn't always just his music. Sometimes it's a complete package. Sometimes the music isn't as strong as how marketable a person is."

Marketability is, as ever, a huge consideration for labels when deciding which artists to bet on. A&Rs routinely ask musicians to send YouTube clips as well as — in some cases instead of — audio files, and music videos on the streaming service have been responsible for jump-starting the careers of a few prominent rappers in the past couple years.

After putting out two mixtapes that didn't do much for him, last March Chief Keef released a song and music video ( over 20 million views and counting) that, less than a year later, landed him a three-album deal worth $6 million with Interscope. Trinidad James signed with Def Jam for an unconfirmed $2 million after his debut single " All Gold Everything" took the internet by storm. There was also Kreayshawn's deal with Columbia back in 2011, rumored to be worth $1 million, which stemmed from her sensation " Gucci Gucci."

"If something has a million views, there's some interest there, so a businessman who's thinking numbers is definitely going to pay attention to that," Roc says. "Take Chief Keef for instance, you can't ignore that. You gotta go sign him and get in business with him. You just gonna let this man make all his money without you? You'd rather go into partnership with him."

A demonstrated audience provokes a bidding war in the industry, which usually results in a better deal for the musician at its center. In 2009, Drake got a $2 million advance, a bigger share of his profits and an unusual amount of creative control. But this was after three widely-heard mixtapes, the careful construction of a rabid fanbase and one bona fide hit. Music executives are giving serious consideration, and serious cash, to musicians with a shorter and shorter track record. And the hip-hop community isn't sure the recent signees are worth the seven-figure deals.

In his new position, Roc has to weigh those who are selling at the moment against those who might have staying power. The fast money and the slow money. The stuff he feels in his gut and the stuff that's already working.

"People are trying to keep their jobs — that's how I look at it. So they sign these guys because people like them. You don't necessarily have to be a great artist for people to like you. Sometimes people just like the person and that's OK," he says. He's also thinking about why people like what they like.

"The internet allows you to get so close to people. You can see a dude chilling at home with his girlfriend. You can see his family life," says Roc. "People just take a liking to certain artists. They just like these characters. They like Trinidad James, they like Riff Raff."

Roc sounds hard-nosed, but not like he plans to play it safe every day. Northern California-based rapper Lil B, though unconventional by some people's standards, is an artist whom Roc says displays qualities that could convince him to take a risk.

"A lot of people think that's wildin' over the top, but me, I see the brilliance in that," he says. "I'd sign something like that because he's brave."

Roc and Man Bites Dog founder RML want to sign artists who can bring in the most return. I asked them what's more important to their jobs right now: talent or marketability?

"The talent comes first. That's more important to me. The talent lasts," Roc says. "I will say though, if the talent's there, you look at that second one," says RML. "You could have all the talent in the world, but can't sell a single record."

And selling records is and always will be the ultimate goal of most any record label — a goal that requires long and unusual hours. This creates another consideration for Roc and RML as they mull over potential signees.

"You want someone you can get along with. Because you're going to be stuck together in a car at some point," RML said. "Stuff is going to happen. And when that stuff happens, if you can be with an individual who remains calm, doesn't have a big ego — I think everyone wants to business with someone like that." Roc agrees. "I just pride myself on doing business with good people," he says. "If a person's talented, but they're a d---head, it's not going to matter. Who wants to be around a clown?"

Man Bites Dog is home to artists like Copywrite, Killah Priest and Vast Aire — all of whom carry a gritty, old-school hip-hop sound similar to that of Roc. In an interview last year, RML told We Goin In "the vision was to make classic records that reflected a certain time period in hip-hop." It's really no surprise that he thinks Roc can steer the label in that direction, or that his music fits nicely into that mix.

"He has an ear for classic music," RML says. "That's a good person to put into a guiding position for what we're doing."

Roc will release his next album, Marci Beaucoup, under the Man Bites Dog imprint this summer. It includes verses from Action Bronson, Ka and Freeway — visual storytellers all. "I just want to bring great music to the table that's critically acclaimed," he says. "I look for passion. I think that's the way to see through it all." 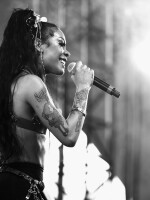