Gov. Jared Polis visited Memorial Rock Tuesday, one of two boulders that wrecked a stretch of Colorado Highway 145 in May.

Emergency reconstruction of the highway was completed in late July, about two months after the Memorial Day weekend rock slide. Colorado Department of Transportation crews also performed rock slide mitigation along the nearby ridges.

Two massive boulders caused the majority of the damage that closed the highway between Rico and Dolores for three days. After blasting a 2.3 million-pound boulder that landed on the road, a single lane of alternating traffic was opened.

John Palmer, deputy superintendent of maintenance for CDOT, said that boulder’s fragments were used to create an embankment alongside the highway. The other boulder, estimated at 8.5 million pounds, carved a 15-foot gouge as it traveled over 1,800 feet to its new location.

Highway 145 has retained its original alignment but now neighbors the geologic curiosity designated as “Memorial Rock.”

Polis said the name was chosen to honor the timing of the slide.

“Some people wanted to name it some silly names like, I don’t know, Rocky McRockin’ or something,” Polis said as he stood by the boulder. “But we thought more of the solemnity of it. It was the eve of Memorial Day weekend, we honor the men and women who have made sacrifices for our country.”

(A “totally-not-scientific” poll by the Denver Post showed “Rocky McRocker Face” as the preferred name by readers. In a statement, Polis said he hopes another Colorado rock could earn the name.)

Polis also congratulated CDOT for the completion of the $1.12 million construction project.

“We are excited that CDOT was able to do such a good job reopening the road,” the governor said. “Coloradans are really known for overcoming obstacles.”

Despite the “point of interest” signage, Polis underlined CDOT’s reminder that travelers should not stop or slow down to view Memorial Rock. In addition to fencing, the rock is now accompanied by a “no parking” sign.

Richard Tibbits, who owns the property on both sides of the highway, welcomes the arrival of Memorial Rock.

“I like rocks. I think it’s cool,” Tibbits said. “I’m just glad nobody was hurt when it fell down.”

CDOT’s announcement of the ceremony included plans to close the highway for the duration of the governor’s visit. Instead, it remained open to a single lane of alternating traffic per Polis’ request. 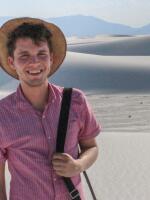 Daniel Rayzel
Daniel is a Michigan transplant to the Four Corners by way of southern Brazil. After years of flirting with trips to the Southwest, he’s finally found a way to combine his loves of public radio and exploring the region by becoming KSJD’s Morning Edition Host and Reporter.
See stories by Daniel Rayzel
Latest Stories