Since 1982, 74 Percent Of Mass Shooters Obtained Their Guns Legally

In the aftermath of a mass shooting, a recurring question arises: How did the shooter get the gun?

In most cases, the perpetrator legally bought the firearms in question. 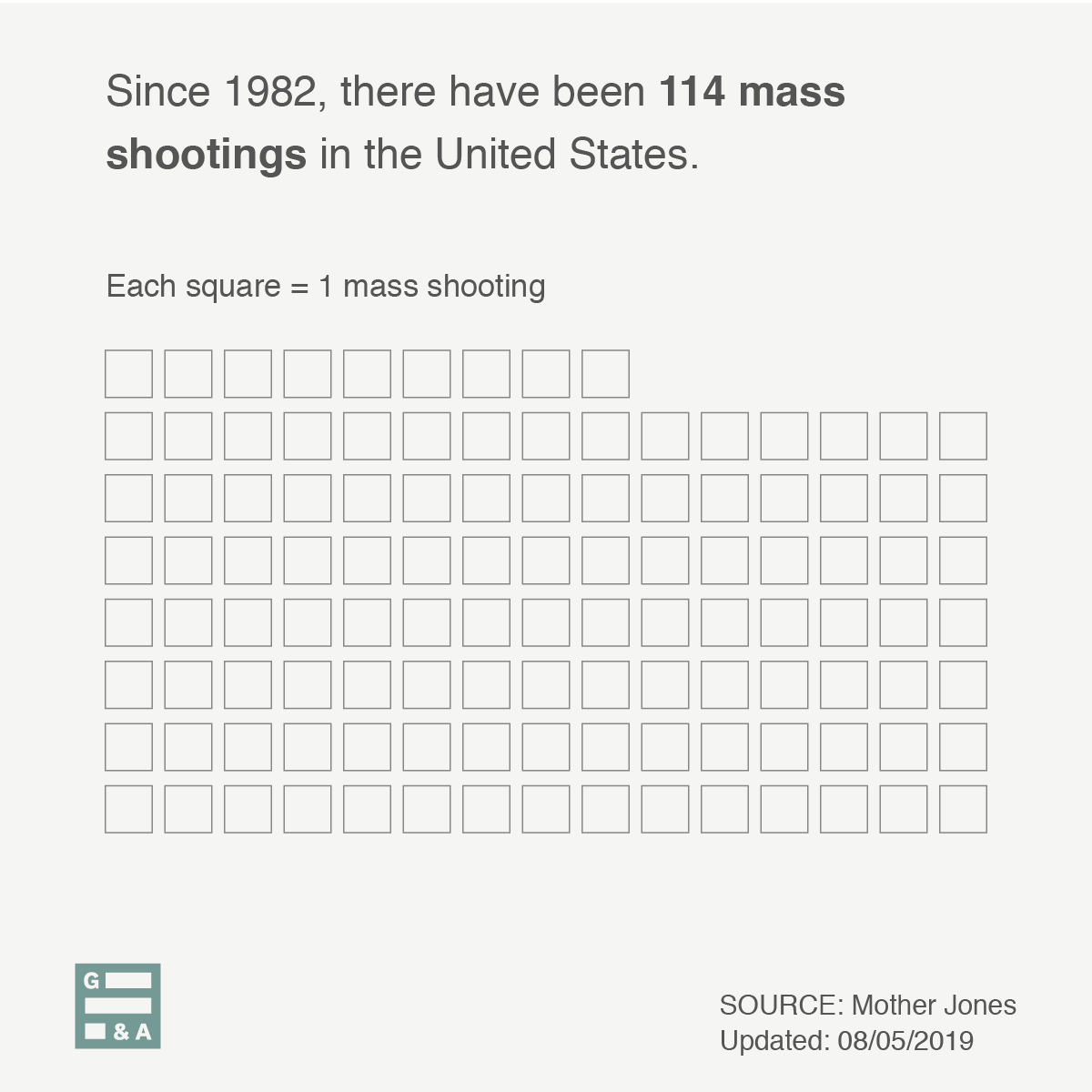 Of the 114 mass shootings committed in the U.S. since 1982, 85 (or 74%) involved firearms obtained by legal means, as shown in this analysis of the mass shooting database created by news organization Mother Jones. 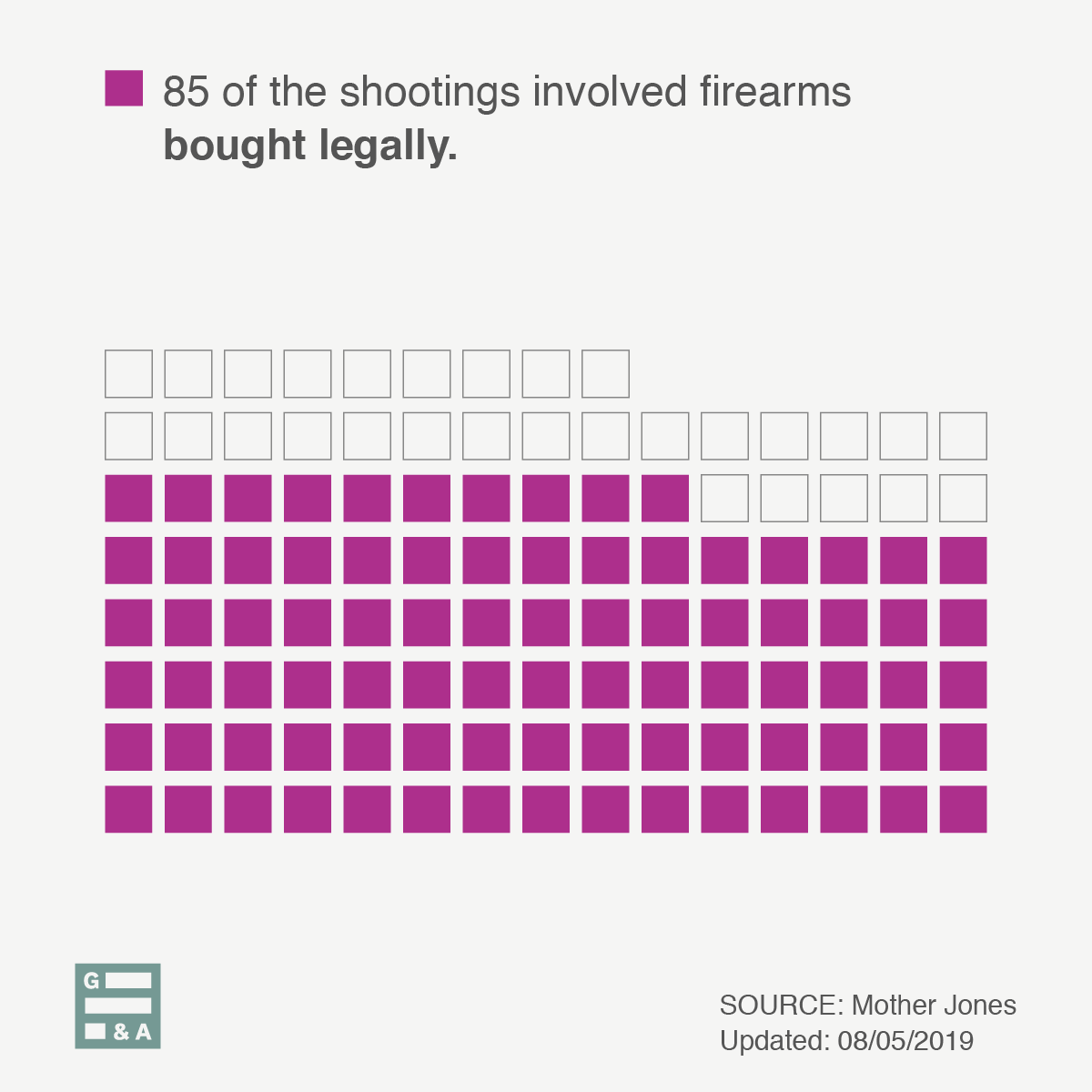 There is no standard definition of what constitutes a mass shooting, which can make analyzing mass shooting incidents difficult. It can also lead to different results in studies of mass shootings. More on that here.

The Mother Jones data used for this visual defines mass shootings as public attacks in which the shooter and victims were generally unknown to each other, and four or more people were killed. The data set excludes all multiple murders related to drugs, gangs or domestic violence.

Where did the rest of the guns come from?

Seventeen of the guns used in mass shootings in the last 36 years — roughly 15% — were obtained in other ways:

In 12 of the mass shootings — roughly 10.5% — we don’t know how the shooter obtained their firearms.

In the case of the shooter in Dayton, Ohio, he used a legal 100-round drum magazine attached to his gun, with which he fired 41 shots in 30 seconds.

Most of the firearms used in mass shootings were bought legally.

Some other national studies on how mass shooters got their guns

While we started with data from Mother Jones for this visual, there are numerous other studies that support our findings and can provide further resources.

For example, The New York Times recently studied 19 mass shootings and found that in the vast majority (more than 75%) of instances the firearms used were bought legally with a federal background check. This group does not include the Tree of Life Synagogue shooting in Pittsburgh, but the ATF concluded the alleged perpetrator of that shooting legally purchased the 10 guns he owned, including those allegedly used in the shooting.

Last October, The Washington Post studied 156 public mass shootings in the U.S. dating back to 1966 and found that 77% of the guns used (where there was information on how the gun was obtained) were bought legally.

In June 2018, the FBI studied dozens of active shooting incidents between 2000 and 2013 and found that only 2% of the active shooters studied purchased firearms illegally.

The data was compiled by Mother Jones and was updated by Guns & America. In some cases, additional reporting suggested changes to how Mother Jones had categorized the method the shooters used to obtain the firearms used.

What Is A Red Flag Law?

Among the popular gun policy proposals raised in the aftermath of shootings like those in Sandy Hook, Parkland and now El Paso and Dayton, the call for “red flag” laws has become a common refrain.

What Is A Mass Shooting? Why We Struggle To Agree On How Many There Were This Year

Every time there’s a shooting in the United States that leaves multiple people injured or dead, a few things happen in reaction. Public officials express their condolences, there’s often a call for legislative action. And reporting begins to come out referencing how many similar shootings have taken place that year.