The Cheyenne Mountain Zoo says two additional animals were killed in a hail storm early this week that caused significant damage and injured animals and people. In a press release, Jenny Koch, the zoo’s marketing director, said a meerkat pup that was missing underground has not been recovered, and they assume it has passed away.

“One of our peacocks also passed due to hail injuries,” Koch said.

The peacock was known as Snoop; Koch said the meerkat pup was from the most recent litter and had not yet been named. Two birds — a duck and a vulture— were also killed and another vulture was injured, according to zoo officials.

All other animals with injuries are improving or stable, Koch said, adding that several have been removed from the list of medical concerns. A Rocky Mountain goat with an eye injury is among the animals still under veterinary care.

Koch said that although severe weather was expected in the area on Monday afternoon, the baseball-sized hail came quickly.

More than 100 undrivable cars remain in the main parking lot at the Cheyenne Mountain Zoo. About 3,400 people were there when the storm began, and many of the vehicles sustained major damage. Koch said zoo security will continue to monitor the cars through 5 p.m. Thursday before towing them to another area of the lot. Vehicles must be claimed by 8 a.m. on Tuesday, August 14th or they will be towed off-site at the owner’s expense.

“Although the zoo is fully covered by insurance, the revenue lost during these high-season days will still be a hit for our non-profit budget,” Koch said. “Our employees are also stretched financially, due to personal vehicle losses.”

“Cheyenne Mountain Zoo is Mr. Penrose’s Zoo, and it has become one of the state’s prized attractions as well as a beloved member of our community. It’s important to all of us that the animals, staff, and visitors are able to recover from this severe hail storm,” El Pomar Chairman and CEO William J. Hybl said in a statement.

Based on recovery efforts to date, the zoo will re-open to the public on Saturday, August 11th.

The same storm led to flooded roads and large hailstones across El Paso County, prompting the El Pomar Foundation to grant $250,000 to help those who live, work in, or were visiting the damaged areas in El Paso and Teller Counties. A strong turnout Thursday for the grant funds at a temporary hail assistance center led to the foundation donating an additional $250,000, for a total of $500,000.

To be eligible, the damage must have taken place in July and August of this year, and funds will be specifically allocated to make up for instances where financial support is not available from federal, state and insurance entities.

The maximum amount per household is $1250.

Guidelines and documentation requirements can be found on the El Paso County website. The hail assistance center at the El Paso Citizen Service Center on Garden of the Gods Road opens again Friday morning at 7:30 and will remain open until 5:30 p.m., or until funds are exhausted.

Meteorologist Pamela Evenson with the National Weather Service in Pueblo says hail is common during the summer months in Colorado.

“But the kind of large hail that we had is of course a bit unusual...thankfully,” she said.

Evenson encouraged residents to finish any outdoor activities before noon on days when storms are in the forecast, as rain tends to start in the early afternoon in southern Colorado.

“Get your car in the garage,” said Evenson. “Just make sure that you have a good sturdy place to go if you’re outside and you see a storm approaching.” 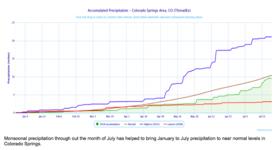 Still, this year’s monsoon season has helped bring six-month precipitation levels to near normal in Colorado Springs. As of late July, data from the National Weather Service in Pueblo shows the city having received just under 10 inches of rain since January. Closer to 11 inches is considered normal based on 30-year averages. By early to mid-June, the agency documented closer to four inches in the city.

Evenson said the increased moisture could help with drought conditions.

“I think we still need to wait and see how much more precipitation we get through the summer to see any relief from the drought conditions. It’s starting to improve definitely,” she explained.

The latest U.S. Drought Monitor released Thursday morning indicates widespread improvement in drought conditions across southeastern Colorado after above-normal rainfall over the past few months. Still, moderate to severe drought covers most of the southeastern region, with a small pocket of extreme drought--an improvement over the week before.

The National Weather Service’s Evenson says other parts of the state remain mostly at or below normal levels. For instance, data shows Westcliffe recorded the driest first six months of the year since 1889.

This post has been updated to indicate the second grant from the El Pomar Foundation. Andrea Chalfin contributed to this report.

Parts of Colorado are experiencing the worst drought conditions in more than a decade.

The severity of the drought varies across the state, from few if any impacts in the state’s northeastern corner to severe and record-breaking conditions in the southern half of the state.