The Science Of Getting Kids Organized

If you've ever gotten a glimpse inside a high schooler's backpack or locker, you know organization doesn't always come naturally to teens. Being scatterbrained in school can make make it tough to stay focused and do well.

That was the case when Lilli Stordeur was about halfway through her freshman year of high school in Northampton, Mass. She felt totally overwhelmed.

"I was being tutored for the classes I was having trouble in," she says, "but I would be having a hard time organizing my binders, and notebooks and stuff, and knowing when to hand things in."

To help Lilli get stuff done, her parents hired Melissa Power-Greene, a former tutor and special-education teacher, to work with Lilli on something called executive function.

Executive functions are categories of skills the brain uses for general organization and judgment. They include attention and focus, working memory, impulse control and self-evaluation.

"When I did tutoring, it was working on helping the student do these sets of math problems, or write this essay," says Power-Greene, who works for the academic coaching company Beyond BookSmart.

In this job, though, she helps Lilli arrange her notes, prepare for teacher meetings and prioritize assignments. On one afternoon they strategize on how to get Lilli caught up on assigned reading. They agree she'll have to sacrifice time to read after school on Friday.

Executive function coaching has emerged from a booming interest in all things neuroscience, especially in education. But no one is policing claims of the field or setting standards for what individual coaches do.

And not everyone who's tried executive function coaching is feeling the love.

"She did a lot of acronyms," says high school sophomore Peter Curran. "I don't remember most of them."

Peter got an executive function coach last year when his grades started to drop. He says his coach showed him how to download calendar software and study guides, but by the end of the year, Peter decided he'd be better off with a regular tutor.

"I felt like she didn't really help me anymore," he says. "It just felt like it was a tedious thing to do."

That was a disappointment to his family, who paid $1,800 a month to bring in his coach.

Those costs are typical for this kind of coaching. The founder of Beyond BookSmart, Michael Delman, says his company charges up to $180 an hour, including check-ins between sessions. (Note, traditional tutoring is often less expensive.)

"We're always looking for the panacea," says Robin Jacob, an education researcher at the University of Michigan who published an overview of 67 studies on executive function training. "We move from fad to fad, and I feel like executive function is sort of the fad of the day."

She says while her research showed there was a connection between executive function skills and academic achievement, the studies did not show that working on those skills leads to achievement.

"We should be cautious before we invest a lot of money in such interventions," she says, "before we really have the solid evidence base to show that it works."

Jacob says tutoring in math or English might actually improve executive functions more than the other way around.

Lilli Stordeur, now a college-bound senior, says her habits and organization have improved since working with her coach.

"I think having the routine of meeting once a week is helpful to know that I have a point where I stop what I'm doing and kind of figure out if I'm on the right track," she says.

That's something many educators and psychologists say can come from less expensive forms of help — or, in an ideal world, for free in the public schools. 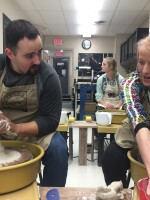