On the last edition of Play It Forward, All Things Considered's chain of musical gratitude, Brooklyn-based musician and producer Nick Hakim spoke about Philly-bred multi-instrumentalist Laraaji. In particular, he explained his love for Laraaji's healing sounds and ambient compositions.

"I am completely infatuated with the world that he has created and the amount of music that he has composed — it feels like an absolute stream of consciousness," Hakim said.

Laraaji says he found Hakim's praise touching. "It's always soothing and confirming to hear the voice of a person who's been influenced or impacted by the music that spirit has brought through me."

The artist spoke to NPR's Ari Shapiro about laughter, his latest album, Sun Piano, and an artist he's grateful for: Californian singer-songwriter Mia Doi Todd. Hear the radio version at the audio link, and read on for highlights of their conversation.

On his creative process

Being in the moment, and letting it flow without editing it in the moment, trusting and feeling and letting the feeling represented most truthfully by what comes through in a stream of consciousness: I feel like that's mostly what it's like, including the piano pieces I've just done. Not so much focus on what the structure's going to be, but letting the — [as] I call it — celestial structure spontaneously unfold.

On crafting an album around the piano, the first instrument he ever learned

It feels like taking a dream off the shelf. I guess in the back of my mind, I'd fantasized about doing a piano album. Playing the piano in an empty church felt like a connection to my first experience of piano, which was in a church. ... I realized by the way people were responding to my music that this musical instrument, or my musical direction, was supporting people in having meaningful internal experiences — soothing, relaxing, nurturing, releasing, uplifting.

On being a comedian before becoming an ambient musician

Laughter has always been the juice of my life, growing up in a family that was very laughter-friendly. Somewhere in high school is when I began exploring comedy, writing comedy — and then into college, where I started performing with various comedy teams. I came from Howard University to New York, where I pursued stand-up. ... The laughter led me to practicing laughter meditation. When I heard about it, I thought it was quite unusual — to laugh when you get out of bed in the morning, or before getting out of bed, for 15 minutes with your eyes closed. [But] I tried that exercise in the early '80s after hearing about it and I thought, "How cool is this?"

On the artist he's grateful for, Mia Doi Todd

Mia Doi Todd is a musician that I've had an opportunity over the last three or four years to be in close contact with. Myself and my partner, we've traveled to California quite a bit, and a friend of a friend got us a place to stay so we wouldn't have to deal with hotel expenses; one of those places was at the home of Mia and her family. And so I got to know Mia's voice — soft, gentle — and got to know some of her album work. One of the songs that sticks out very clearly when I think about her is " My Baby Lives in Paris." ... Her sweet, silky, soft, patient, kind energy has transformed my experience of California.

Ari Shapiro
Ari Shapiro has been one of the hosts of All Things Considered, NPR's award-winning afternoon newsmagazine, since 2015. During his first two years on the program, listenership to All Things Considered grew at an unprecedented rate, with more people tuning in during a typical quarter-hour than any other program on the radio.
See stories by Ari Shapiro 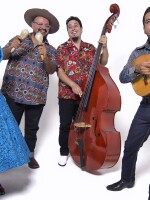