Armed Militias See The Pandemic As A Recruiting Opportunity | KUNC

Armed Militias See The Pandemic As A Recruiting Opportunity

The COVID-19 pandemic and nationwide protests against police violence have put the country on edge, and the unrest appears to be a recruiting opportunity for some anti-government groups.

Experts say economic devastation, fear and uncertainty caused by the coronavirus — as well as heavy-handed government tactics — are pushing some Americans toward groups like militias that espouse self-reliance, armed resistance and a dim view of government.

“Some of them are going to the internet to look for answers or they stumble across extremist propaganda that puts a spin on things or may add a conspiracy theory to what’s going on,” he said. “And it opens people to these new ideas, and so it’s a recruitment opportunity for these groups.”

Recruitment numbers are hard to come by, but a Facebook page dedicated to the “boogaloo,” a nickname for a second American civil war many militia members think is looming, has gained nearly 4,000 followers in just two weeks. Nearly 35,000 people follow the page.

Johnson wrote a paper on the threat of far-right violence in 2009 when he was at the Department of Homeland Security, but the department rejected his findings and he eventually resigned. He says the federal government still isn’t taking the threat seriously enough, including a president who sometimes appears to be offering an olive branch to anti-government groups.

“I would like to see the president tone down his rhetoric and to stop coddling these types of people and tweeting that they’re fine people and that they’re doing a patriotic duty by having these anti-lockdown protests and things like this, because all that does is embolden [them],” he said. “And some people may interpret that as a green light to do something even more harmful.” 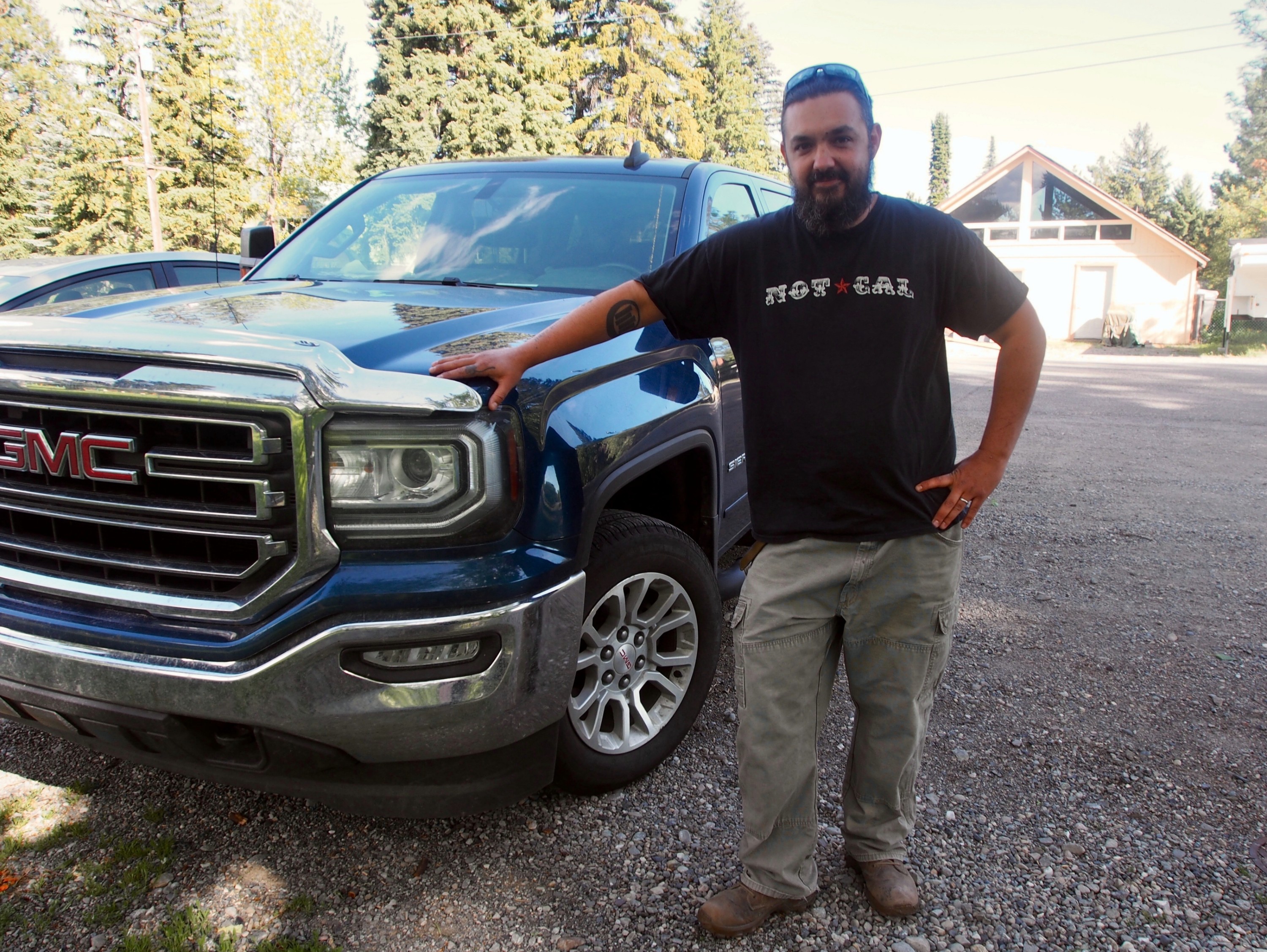 Eric Parker, president of The Real 3%ers Of Idaho militia. Militia watchers say the fear and uncertainty of a global pandemic and nationwide protests has been a recruitment opportunity for groups like Parker’s.

‘Good For The Numbers’

In Hailey, Idaho, Eric Parker says the militia he leads, The Real 3%ers Of Idaho, has seen hundreds of additional recruits since the pandemic began.

“It has been good for the numbers, right?” he said. “I don’t mind saying that because I believe what we’re doing is good.”

Parker shot to fame after a photo of him pointing a rifle at federal agents during a 2014 standoff at a Nevada ranch hit screens around the country. He faced a long prison sentence but pleaded guilty to a single misdemeanor and walked free after the verdict.

His group does tactical weapons training and posts videos on Facebook like one titled “When they come for your guns, step one, don’t let them,” which shows a man shooting an automatic weapon. But Parker has long described the group as more than a militia, arguing they are a community organization. And, while he rejects the term “anti-government,” he does see them as an alternative to government help in a crisis like the one we’re living through right now.

“A lot of us don’t necessarily trust FEMA to be there when we need it,” he said. “So creating a network of self-reliance and relying on your neighbor is kind of what we do.”

And during the pandemic, the group has helped with potato giveaways, where farmers who can’t get their produce to market let those in need take their spuds for free. Other groups under the umbrella of the so-called Patriot Movement have organized food drives, donations to churches and support for businesses during the pandemic.

“The directive during an emergency with the organization, whether it’s manmade or natural, it’s look around your community and see where you can help,” Parker said.

But Parker said there’s no agenda beyond helping the community.

“I’ve heard that many times from elected officials,” he said. “You know, ‘Let no good crisis go to waste.’ And that’s not us — this is what we were doing before, just nobody was asking.” 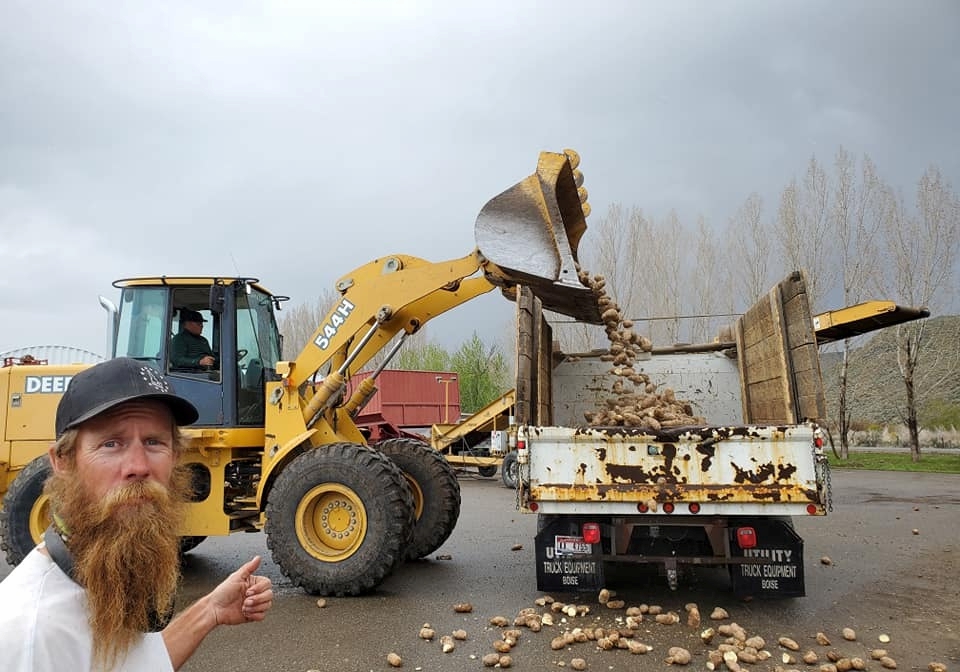 A member of The Real 3%ers Of Idaho militia poses for a photo during a potato giveaway in Southern Idaho in this photo posted to Facebook. Some anti-government groups have shifted their focus to community efforts like food drives and fundraising for local businesses and churches during the COVID-19 pandemic.

‘I Don’t Care What Percent You Are’

Herzfeld-Copple and other extremism experts say Americans’ understandable fears during the twin crises of the pandemic and nationwide unrest over police violence make this a critical moment for militias and sovereign citizen movements.

“They’re doing their best to leverage fear and uncertainty in many communities to broaden their political power and influence,” she said.

Herzfeld-Copple sees events like the potato giveaways as ways to make the movement look less threatening. And there are signs it’s working. A newspaper report on one potato drive in North Idaho referred to Parker’s militia simply as a “nonprofit.”

Molly Page is an Idaho political activist whose causes don’t normally dovetail with Three Percenters. She was a key member of a recent effort to expand Medicaid in Idaho. She organized an early potato giveaway that was aided by a member of the Real 3%ers Of Idaho who offered his dump truck.

“As one of my friends was joking, ‘I don’t care what percent you are,’ ” she said. “We need help, and we need people to come help us transport the potatoes.”

Armed militia members and police have squared off in Texas over COVID-related stay-at-home orders. And in Michigan, the state Legislature suspended its session after armed protesters, some affiliated with a Michigan militia, took to the capitol and threatened legislators while thousands attended a protest outside.

And there have been more violent incidents. In April, a train engineer is alleged to have purposefully crashed his locomotive in an attempt to hit a U.S. Navy hospital ship helping with the COVID-19 pandemic to expose a conspiracy. In May, police arrested a Colorado man found with pipe bombs who was on his way to an armed protest against the state’s stay-at-home order. He was alleged to be stockpiling guns for a coming war and planning to use pipe bombs against law enforcement who tried to take his guns. And the FBI has warned of a potential surge in hate crimes against Asian Americans.

George Selim served under the George W. Bush, Obama, and Trump administrations, monitoring domestic extremism at the Department of Homeland Security and the National Security Council. Now he’s with the Anti-Defamation League and said the federal government has been slow to take the threat of domestic extremism seriously.

“For a long time, there has been a bit of an imbalanced focus in this country that the only threat that we face to our country — and to our public safety — comes from outside the country,” he said.

And he says it’s unclear where the Trump administration stands on anti-government groups. At one point, Trump tweeted “Liberate Michigan,” seemingly supportive of the Michigan armed protesters in defiance of his own health experts’ guidance to stay at home.

That’s particularly alarming given that some of the armed men and women who have taken to the streets are out there to intimidate people, Selim said.

“The messaging [from the White House] has been confusing and convoluted,” Selim said.

It’s still to be seen how big and lasting militia recruiting gains will be. But the Patriot Movement is not slowing down with states reopening: A who’s who of anti-government activists from several states are planning a “Liberate America” rally Saturday in North Idaho.

This story was powered by America Amplified, a public radio initiative.

Justin and his buddies look like they're from a special ops team – they're wearing flak jackets and carrying assault weapons. But they aren't military and they aren't police.

"I see myself as a concerned citizen who happens to be armed," he says.

Listen
Listening...
/
Click 'play' to hear the audio version of this story.

Gun Sales Continue To Boom During The Pandemic

Gun sales continued to boom in May, the third-straight month with a spike in estimated sales.

The FBI says it performed more than 3 million background checks in its NICS database in May, more than 700,000 more checks than it performed in May 2019.