In its annual scorecard ranking the strength of state gun laws, the gun control advocacy group Giffords boosted ratings for a handful of states in the Midwest and West, most of which have traditionally been home to a strong gun rights culture. 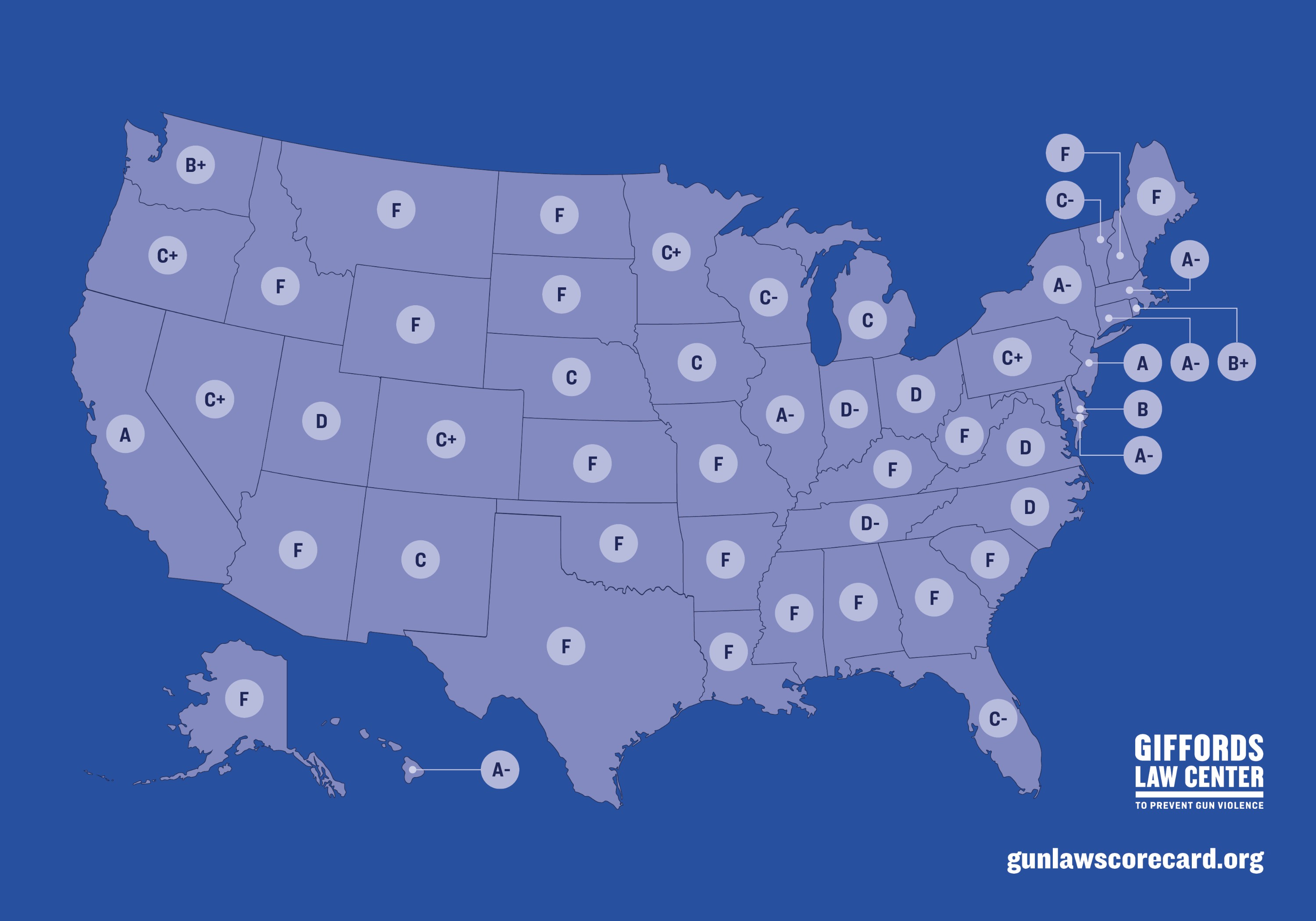 In 2018, Giffords raised the grades in eight states for passing measures like extreme risk protection orders and bump stock bans.

Extreme risk laws in particular have quickly become widespread since 17 people were killed during the Parkland school shooting two years ago; at least 17 states plus the District of Columbia currently have this type of law on the books. But Laura Cutilletta, managing director of the Giffords Law Center, says that there has been an “increasing drumbeat” of activism and momentum since 2012 when 26 people died in the Newtown school shooting.

“This year, we saw six states’ grades go up because they increased their laws. That’s no small feat,” Cutilletta said. “That sounds like a small number but when you think about the effort that goes into that and the courage of the lawmakers that have to stand up to the gun lobby … The story that it tells is that we are making progress and it’s not just in the A states.”

Still, on the 2019 scorecard, Giffords gave 21 states a failing grade for their gun laws and pointed to the issue of firearms trafficking as one that undermines states’ efforts to tighten gun restrictions. In 2012, the first year the grading system was in place, 24 received failing grades, though Cutilletta says methodology has changed over the years, especially after the Sandy Hook school shooting. Giffords also highlighted trafficking back then, stating in a release: “Gun laws also matter beyond a state’s borders. Illegal gun traffickers often buy weapons in states with weak laws that end up recovered in crimes in other states.”

Giffords has issued its annual report almost every year since 2010. Laws and policies are assigned points; states gain and lose points depending on how they have tightened and loosened their gun laws over the past year. Giffords then compares these scores to state gun death rates compiled by the U.S. Centers for Disease Control and Prevention.

As in previous versions of the scorecard, a press release outlining the latest grades says, “Year after year, the evidence shows that gun laws save lives in states with the courage to enact them.” But proving that stronger gun laws directly cause a reduction in gun deaths is difficult. Gun violence is driven by many factors and the efficacy of gun laws can be difficult to track.

“We’re not academic researchers … somebody else would need to do the analysis for the causation part. That’s very complicated,” Cutilletta said. “We’re trying to draw attention to the fact that there’s this correlation when you lay the numbers next to each other. You can see a stark difference in the states that have strong gun laws and those that don’t and the number of people dying in those states.”

Gun laws in New Hampshire, Maine and South Dakota all receive F grades in Giffords’ scorecard but have population-adjusted gun death rates below the national average of 11.9 per 100,000 people.

Inaction At The Federal Level

With the wide range of state grades, Giffords is advocating for stronger gun laws at the federal level. “To bring an end to our country’s gun violence epidemic,” the group says, “we must take action to remedy America’s inconsistent patchwork of state laws.”

But without the necessary votes, a package of gun bills, including a bill strengthening background checks, has stalled after passing the U.S. House of Representatives.

According to the election spending tracker website OpenSecrets, Giffords PAC, the lobbying arm of the advocacy organization, has spent $3.9 million on the 2020 elections so far. Giffords says it has recently spent funds on a mayoral race in Aurora, Colorado; candidates for the state legislature in Virginia; and national ads targeting Senate Majority Leader Mitch McConnell, R-Ky., and Sen. Cory Gardner, R-Colo.

In the past, this kind of spending has been associated with results. An analysis of gun control group Everytown for Gun Safety’s 2018 endorsements by Guns & America shows that 81% — or 46 — of the 57 candidates for U.S. House endorsed by Everytown in the 2018 cycle won their respective races.