Stuck At Home With Your New Gun? Some Gun Owners Want To Help You Stay Safe | KUNC

Stuck At Home With Your New Gun? Some Gun Owners Want To Help You Stay Safe

As Americans flock to gun stores in the face of coronavirus fears, many gun dealers report an influx of new customers, taking home a deadly weapon for the first time. In response, long-time gun owners from across the country are stepping up to help these newcomers get some safety training in the age of social distancing.

Quantifying the number of first-time buyers is impossible, but anecdotally, gun store owners say there are many.

Jon Ogawa, a sales associate at Grandpa’s Pawn & Gun in Longmont, Colorado, says sales in the past few weeks have been higher than ever.

It’s vital that new gun owners understand what they’re getting into, Ogawa says.

“It’s a little bit concerning because it tends to be uneducation or ignorance that ends up being the reason why people end up getting hurt,” he said. ”It’s important that we all understand the responsibility.”

“The majority of customers coming in the door in this increase are new customers,” Constantine said. “My guess is that many of these first-time buyers are people who had been thinking about it for a while, on the bubble as to whether or not to spend money, and now they’re coming in because of this virus and they’re nervous. They’re deciding to spend the money on personal protection.”

New gun owners represent an opportunity for the gun rights community, eager both to keep people safe and to add to its ranks.

“I want to be a good ambassador for the Second Amendment and for firearms owners,” said Chuck Rossi, co-founder of an online gun rights organization called Open Source Defense.

A few weeks ago, Open Source Defense launched a type of informal, online training called Office Hours, using a shared calendar that allows users to sign up for a 30-minute video conference with a long-time gun owner.

“We have our introductory, ’How’re you doing? How’re you holding up? Where are you in the process? What are your questions?” Rossi explained.

Rossi, who is a competitive shooter, and others from Open Source Defense who have volunteered as trainers go over the basics of gun safety, rules like “Keep your finger outside the trigger guard until ready to shoot” and “Always treat every firearm as though it is loaded.”

“At some point, I’ll bring out an unloaded gun,” Rossi said, “either a pistol or a rifle, and say, ‘Okay, here’s what a Glock looks like, here’s how it operates, here’s the ergonomics of it, here’s how big it is.’”

In his first week offering remote office hours, Rossi said he had already had a few sign-ups and gotten questions on everything from how to load and unload a gun to how to buy one in California, where he lives.

Few states require gun buyers to undergo training before purchasing a firearm. Connecticut, Maryland, Washington D.C., Massachusetts, California and Washington are among the states that require prospective purchasers to complete some safety training, though studies have shown that the efficacy of training courses varies. 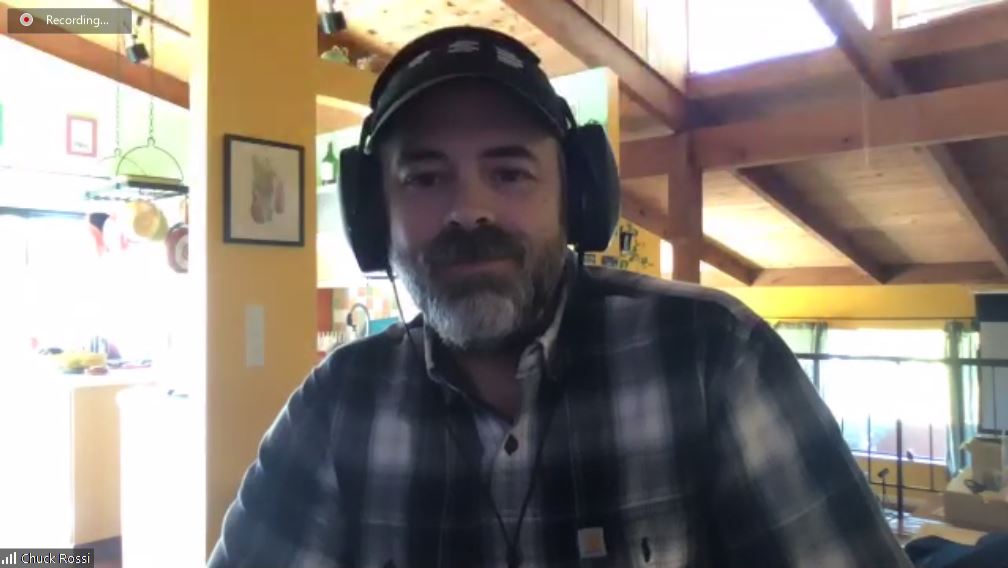 Chuck Rossi, co-founder of Open Source Defense at his home in California. He uses video conferences to connect with new gun owners.

“We know that there’s a lot of folks that have either recently purchased a firearm or would like to buy a firearm, but they don’t really understand how to use it, store it, what kind of ammunition to put in it, etcetera,” said an NRA trainer during a recent session sponsored by the Bucks County Sheriff’s Office in Pennsylvania, which was streamed on Facebook Live.

One video from a pair of gun enthusiasts in Tennessee posted on the popular gun-focused YouTube channel hickok45 has over 250,000 views.

“We wanted to do a video for all the new shooters out there and gun owners,” one of the men says in the video. “We feel almost obligated.”

The National Shooting Sports Foundation says it is urging anyone who is considering buying a gun to check out the organization’s resources on storage and safety.

But learning how to use a gun online is limiting. Chuck Rossi, with Open Source Defense, says the goal is really just to go over basic firearm safety, basic firearm manipulation and some etiquette.

“That’s all you can do over video chat and that’s all we expect,” said Rossi. “The encouragement from us after the chat is we suggest where they can go for their range and get some (hands-on) training.”

During a Pandemic, More Guns Could Mean More Risk

The goal of this kind of training is, ultimately, to prevent people from getting hurt. Dr. Emmy Betz, a researcher at the University of Colorado focusing on injury prevention, says unintentional shootings are a risk. But she’s also worried that having a gun in the home risks escalating violent confrontations.

“Specifically, in cases of domestic violence or when someone is suicidal — that having that gun present could turn a situation deadly,” Betz said.

Every year, tens of thousands of people die by firearm suicide and domestic violence homicide combined. Research has shown that the presence of a gun is associated with a higher risk for both. So, while Betz says it is “wonderful” that gun owners are stepping up to offer training, she worries that the combination of more guns plus coronavirus fear and anxiety could lead to more gun deaths. 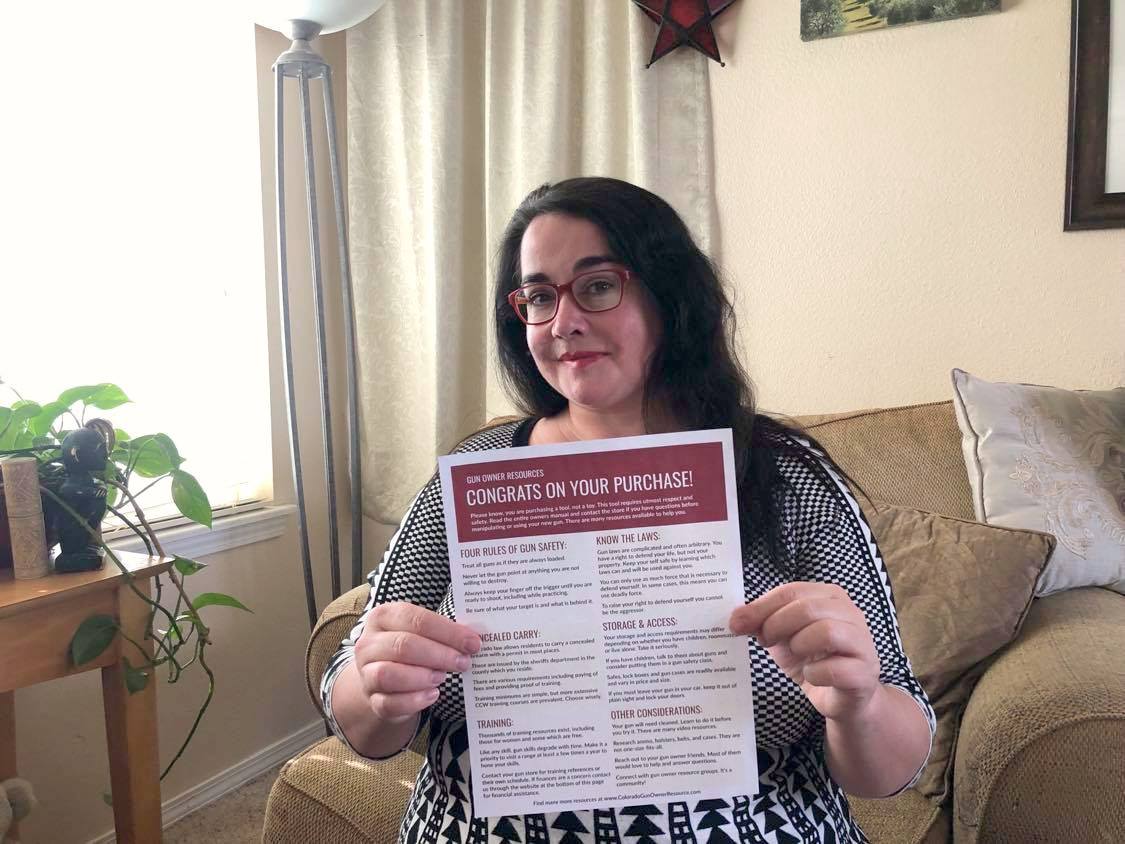 Lesley Hollywood, executive director of Rally For Our Rights, holds up a new flyer the group produced in an effort to connect with new gun owners about gun safety.

Rally For Our Rights, a Colorado-based guns rights group, is hoping to reach new buyers before they even get home.

The group produced a flyer and is sending it out to gun stores, hoping that employees will hand it out at the register. It goes over topics like state laws, gun storage options and the importance of keeping guns clean.

“It begins by saying ‘congrats on your purchase,’” said Lesley Hollywood, executive director of Rally For Our Rights. “Please know that you are purchasing a tool, not a toy. This tool requires utmost respect and safety.”

Hollywood emphasized that her group is constantly thinking about these kinds of safety issues, but this particular flyer is the product of a recent online brainstorming session the group held about how to respond to the new uptick in gun interest. Members worried out loud about new owners shooting themselves in the foot, or their kids getting a hold of the gun. One person at the meeting talked about reaching people who are “gun curious.” So, in addition to wanting to help, this moment is also an opportunity for gun groups to grow.