Merry Jackson wanted to protect her daughter, Lori. She did the best she could. But when Lori’s husband, Scott Gellatly, stormed through the door of her parents’ home, there wasn’t much Merry could do.

“He’s here! Scott’s here!” Lori screamed upstairs to her mother, who was in bed with her twin 18-month-old grandchildren.

Merry hit the panic button she wore around her neck that was linked to her home security system. Lori called 9-1-1. Through tears she told the dispatcher that her husband was back, that she had a temporary restraining order against him and that when he left five weeks ago, he had taken his gun with him. Then, Lori and Merry went downstairs, hoping that Gellatly wouldn’t come for the babies.

“We knew he was coming in a rage,” Merry said.

They fought at the door.

“He had Lori by the hair and he was trying to pull her out,” Merry said.

Lori and Merry pulled against him, screaming.

“He was losing the battle,” Merry said, “and he just let go with one hand and went in his pocket and pulled out a gun.”

Gellatly started shooting. He hit Merry in her jaw, arm and back. He shot Lori in her head and chest.

Federal law prohibits people subject to protective orders for certain domestic violence offenses from purchasing or possessing a gun. But the restraining order that Lori Jackson had been granted by a judge in April 2014 was temporary, so her husband wasn’t barred by federal law from purchasing a gun. A hearing for a permanent order was just weeks away.

At the time, Connecticut state law also did not prevent Gellatly from buying a gun, despite the temporary restraining order against him. He had taken his shotgun with him when he left Connecticut. While hiding out in Virginia, Gellatly bought the handgun he would ultimately use to kill his wife.

A version of the federal Violence Against Women Act (VAWA) seeks to change that by adding multiple provisions that would expand protections for victims of intimate partner violence. In the past, VAWA provided funding for states, domestic violence organizations and law enforcement to address an issue that affects millions of women each year. 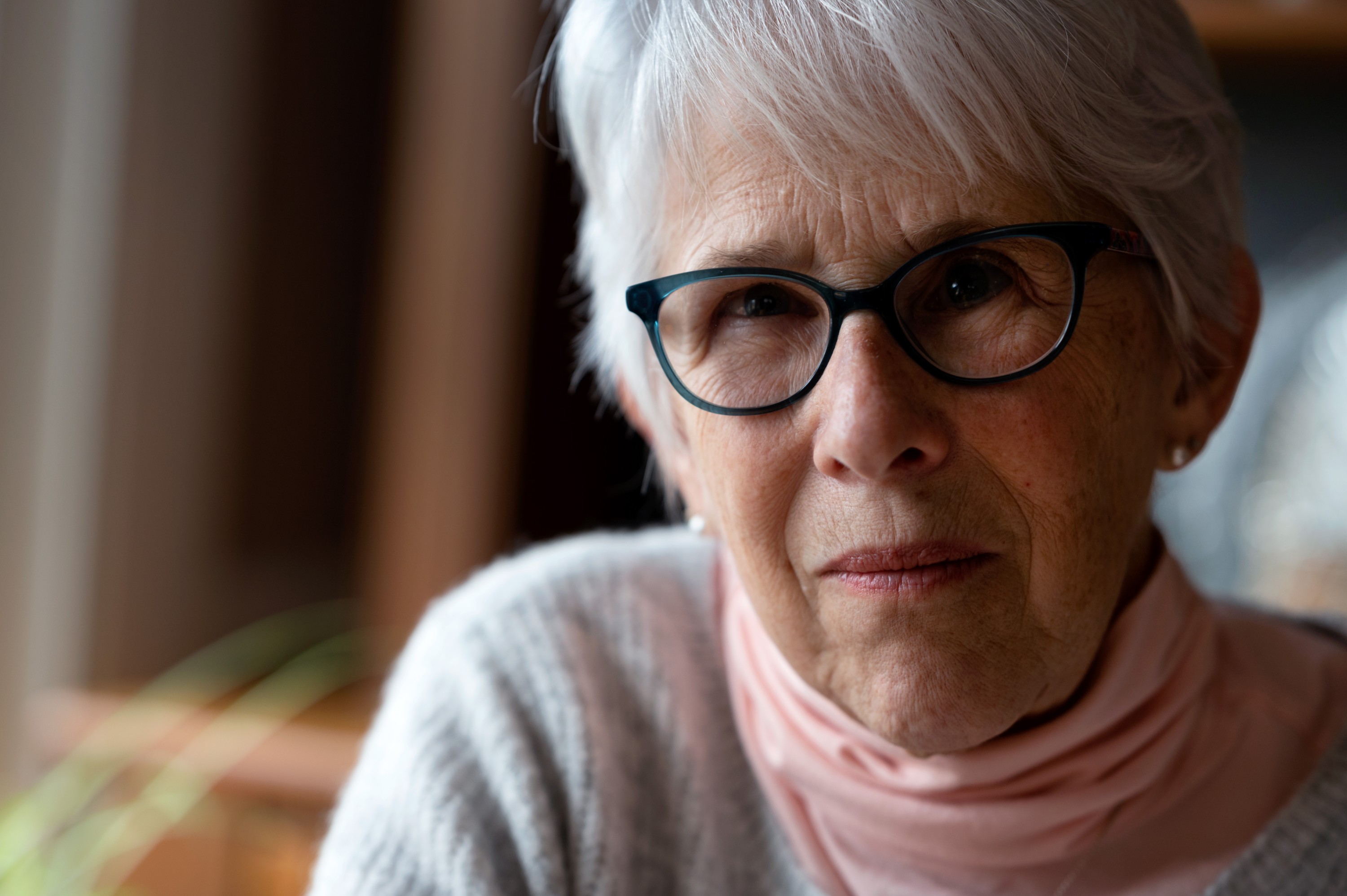 In 2014, Merry Jackson was shot multiple times by her daughter’s husband. One bullet exited through her left eye. Her daughter, Lori, did not survive.

The most recent version seeks to go beyond funding, creating statutes that in many instances regulate gun purchase and possession. One provision would prevent those with a temporary restraining order from legally purchasing a gun. Another would prohibit boyfriends and stalkers from possessing guns. A third provision would require law enforcement and prosecutors to be notified when a domestic abuser attempts to purchase a firearm. But it’s those gun provisions that have kept VAWA stalled in Congress. The U.S. House passed the bill in April 2019. The Senate has refused to take it up.

Opponents of the 2019 House-passed version of VAWA maintain that the provision that would prevent violent dating partners and those convicted of stalking — often called the “boyfriend loophole” — from possessing guns diminishes Second Amendment rights. Sen. Joni Ernst, a Republican from Iowa, introduced a version of VAWA that does not include LGBTQ or expanded partner protection provisions, and excludes protections for Native American women, according to Iowa Starting Line. In November 2019, Ernst shut down an attempt to vote on the bill, saying that it would not make it through the Senate. Ernst’s office did not respond to a request for comment. The National Rifle Association also opposes closing the so-called boyfriend loophole, saying the provision is “too broad and ripe for abuse.”

The presence of a gun in domestic violence situations makes it five times more likely that a victim will die, according to a study published in the American Journal of Public Health. And when a gun is used in a domestic violence assault, the chance of a fatality becomes 12 times more likely than using another type of weapon or bodily force, according to a study that examined intimate partner homicide of women.

Doug Jackson saw a picture of his house on the internet while he was at work. News of the shooting in Oxford, Connecticut, had spread quickly.

He arrived home to yellow tape stretched across the entrance to his driveway and dozens of cops.

Merry and Lori were already gone by the time he made it back. Merry underwent weeks of surgeries for her wounds. While his wife remained in the hospital, Doug went to their daughter’s funeral.

When the Jacksons first met Gellatly, Lori’s husband, he was the recently-divorced new neighbor with two sons. He’d stop by to talk to Doug from time to time and then after a while, took a liking to Lori.

“It really blossomed from there,” Merry said. “He seemed like a really nice guy, very likable, helped — would do anything for you.”

It wasn’t long until Lori was pregnant.

“It upset me because I felt like he was more or less trapping her,” Merry said. “I saw the aggression in him.”

She recalls a time after Lori and Gellatly had gotten engaged and they had a “terrible fight” with their neighbor over a dog. Merry didn’t like how he talked to Lori.

“After that, he got very possessive of her,” Merry said. “Even before they got married, she lost all her friends. He would make her de-friend anyone that was a male on Facebook. He would talk down to her. He could snap real quick.”

The couple had a destination wedding.

“Even that day that they were getting married, I said ‘You don’t have to go through with this,’” Merry told Lori, “‘You have family.’”

Lori told her mother that she loved Gellatly and that he treated her well. Though Merry said she wasn’t aware of Gellatly physically abusing Lori, she noticed how he’d always sit right next to Lori at family gatherings and pinch her arm. Lori would tell him to stop — Gellatly would say they were “just little love bites.”

When the twins were born, Lori wouldn’t leave them alone with her husband, Merry said. Merry had retired to watch them. Gellatly would constantly call or text Lori when he wasn’t with her.

“On the way home from work, she had to be connected to him,” Merry said. “Even if they weren’t talking, she’d have that phone on speaker. I just thought, this is not normal.”

Merry sensed that Gellatly didn’t like the connection she had with Lori.

“He was trying to break it and he couldn’t,” Merry said.

Gellatly would lash out at Merry, yelling and harassing her when, on rare occasions, she needed to leave babysitting the twins early.

Lori and Gellatly’s fights got worse. One time, she tried to leave with the twins but he pushed her down and grabbed one of the babies from her, Merry recalled.

“He fled the next day,” Merry said. “He was gone — took what he wanted out of the house and left.”

Officer Michael Dyki, who at the time was with the Connecticut State Police, remembers the bruises on Lori’s arm when she walked into the police station to file a domestic violence report after an alleged assault by her husband. A warrant was put out for Gellatly’s arrest. After that, Dyki made a routine of calling to check on Lori.

Merry and Lori each filed for temporary restraining orders against Gellatly. While Lori’s was approved, Merry’s was denied. Merry said the judge ruled she wasn’t in danger. Lori decided to move in with her parents, who lived just a few houses down.

But since Gellatly had fled, the police couldn’t serve the warrant. When Lori’s first restraining order expired, she got another one a few weeks later.

“I think she was always worried that he would or could come back,” Dyki said. “A restraining order is a piece of paper. Not everyone abides by a rule or a law or a piece of paper, so I think that was always in the back of her mind.”

Gellatly would harass Lori through texts, voicemails and Facebook.

“It was really trying, those five weeks that he was gone because we never knew,” Merry said. “And I always felt, he’s going to strike.”

During that time, Lori would be escorted into work by her co-workers and her building was placed on alert because Gellatly had threatened her boss.

“It was getting stressful because things were escalating,” Merry said. “I just had the fear that he was always out there.”

Lori told Dyki she was afraid her husband might harm himself, so Dyki would call Gellatly,too.

“He knew there was a warrant here,” Dyki said. “He knew I wasn’t just calling to see how he was doing.”

The night before Gellatly came back to Connecticut, Dyki said he told him he was in Florida.

The next morning, as Dyki was getting his kids ready for school, he got a phone call from another officer.

Many victims of intimate partner violence file initially for a temporary restraining order because they can be put in place relatively quickly. In many states a judge can issue a temporary order without holding a hearing or informing the other party.

“It is there to safeguard victims in emergency or crisis situations,” said April Zeoli, an associate professor at Michigan State University’s School of Criminal Justice. “If someone is in danger and they apply for a [full] restraining order, waiting a couple of weeks for that full hearing to take place to get the firearm restriction could take too long. Injuries, firearm use — all of that could happen during that wait time, so covering that temporary order provides a firearm restriction immediately.”

“So often when someone applies for domestic violence restraining order, they’re doing so in the context of leaving that relationship,” Zeoli said. “That restraining order and the fact that they’re leaving can signal to the abuser that the abuser has lost control. If the abuser thinks that they’ve lost that control, they might be more likely to resort to more severe and deadly violence.”

Sen. Richard Blumenthal, a Democrat from Connecticut, remembers meeting Merry shortly after the shooting when she was still in bandages.

The Jacksons joined Blumenthal in Hartford, Connecticut, and Washington, D.C., as he introduced the Lori Jackson Domestic Violence Survivor Protection Act to the U.S. Senate in July 2014. The bill restricts those subject to temporary restraining orders from legally purchasing and possessing guns. Blumenthal reintroduced it in 2015 and 2017.

“Her husband bought a handgun that he never should have been permitted to purchase and wouldn’t have been but for this loophole,” Blumenthal said. “That’s why we want to close it. It is a very stunning and staggering example of how guns in one state can do such damage in another.”

Since its introduction, the legislation named for Lori Jackson has been added to the broader Violence Against Women Act, which remains unauthorized.

Despite losing a portion of her eye and dealing with daily pain, Merry, along with Doug, still join Blumenthal and domestic violence advocates in advocating for the bill.

Adding federal firearm restrictions to temporary orders could save lives, according to the study by Michigan State’s April Zeoli.

“Reauthorizing the Violence Against Women Act and extending those firearm restrictions to dating partners, to ex parte orders,” Zeoli said, “could be very important in saving not just the lives of intimate partners, but those additional victims that are also unfortunately too often killed in the context of intimate partner homicide.”

If you need help call the National Domestic Violence Hotline:

if you’re hard of hearing you can email: