They were dropping like flies. Butterflies, that is. When a deadly, male-killing bacteria surfaced in a colony of blue moon butterflies, some wondered how the species would be able to sustain itself.

Sylvain Charlat, a biologist at University College London, has studied the way that insects are reacting to this virulent bacteria.

Charlat discovered that the butterflies, found in the South Pacific, have managed to survive, despite a shortage of males. The female blue moon butterfly, or, Hypolimnas bolina, has adapted by becoming more promiscuous.

In colonies where the bacteria is rampant, the male-to-female ratio can be as low as 1 to 90, says Charlat. Surviving males become fatigued and put less and less effort into mating, while females agressively increase their mating behavior.

Intrigued by Charlat's study, biologist Olivia Judson of London's Imperial College says it's possible that one-fifth of the insect species in the world have now been infected by the dreaded germ, Wolbachia.

Though nature has found a way to work around the bacteria, it still creates quite a spectacle: "When males are in short supply — as anyone who's been to a girl's school can tell you — things get pretty nasty," says Judson. 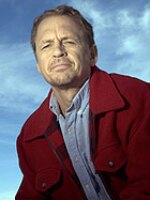