More young adults are expected to vote in the upcoming election than in previous years. In 2018, Colorado ranked among the top three in youth voting, with a rate considerably higher than the national average. While the state can boast a high turnout for Generation Z and Millennial voters, Metropolitan State University of Denver is leading the charge.

“Have you guys been keeping up with the debates?” asks Mayra Valdez.

“I just have to say, I’m very proud of Kamala and I’m like hyped for a woman to be in that position. I just think she was very poised,” replies Sera Jones.

They are part of IGNITE, a national, non-partisan organization that empowers young women interested in politics and policy issues. There are chapters at colleges around the country and because the two universities are on the Auraria campus, the students are working together.

Mayra Valdez is MSU Denver’s chapter president. The senior, who is majoring in political science with a minor in legal studies, announces their first event for the school year.

“We will be collabing with the Political Science Association of Metro (MSU Denver) to do two panel discussions one before the election and one after the election,” she says.

Her top issues in this election are immigration, criminal justice and reproductive rights. But the 22-year-old can’t vote.

This is why Valdez has been a member of IGNITE for the past two years — she loves talking politics with women from all backgrounds.

“Even though I can't use my voice in a voting atmosphere, my goal is to be able to persuade someone else — even if our views don't align — to be able to use their voice and then just to persuade people to get the vote out and actually vote,” she says.

In the 2016 presidential election, 65.9% of MSU students voted, compared to a 50.4% voting rate among all higher education institutions. During the 2018 midterm elections, MSU Denver’s student voting rate was 54.9%, while the national average was 39.1%.

“At Metropolitan State University of Denver, we've always had a campus that's been highly engaged,” said Elizabeth Parmelee, associate vice president for undergraduate studies. “I think it is sort of in our DNA.”

MSU Denver’s student voting data is tracked by the National Study of Learning Voting and Engagement (NSLVE). NSLVE, an initiative from the Institute for Democracy & Higher Education at Tufts University, has a database of around 10 million student records from institutions around the country and 20 two-year and four-year colleges and universities in Colorado.

The university’s higher-than-average student voter turnout is due in part to its non-traditional, non-residential population, said Parmalee.

“When it's time to vote, they're already living in the community typically that they've grown up in and I think that does make it easier for them to engage in questions of what's going on in their community,” she said.

“In a traditional year, we would also ask to have students going to classes and talk to students about voting,” said Parmelee. “Then as it got closer to elections, we would really start drumming up the 'have you voted yet.'”

The American Democracy Project (ADP) works with higher education institutions to prepare the next generation of informed, engaged citizens. The national program is part of the American Association of State Colleges and Universities (AASCU) which has nearly 400 member schools.

“It is meaningful when students register to vote when they’re in college. It’s oftentimes the first step towards civic engagement,” said Felice Nudelman, executive director of ADP.

ADP is a network of 296 AASCU institutions in 48 states and the District of Columbia. It provides a variety of programming, from looking at ideological differences to the role of science in a democracy and stewardship of public lands. ADP recently hosted a national debate night watch party for students and faculty from schools including MSU Denver. The next day. students participated in a debrief to discuss what they learned.

“We have facilitated conversations for students from across the country,” Nudelman said. “(They) can meet with one another and have civil discourse around policy, around the debates, around the issues.”

AASCU represents some of the most diverse undergraduate populations in the country and if these students don’t participate, said Nudelman, “we’ve lost a generation.”

An estimated 28% of eligible voters under the age of 30 voted in the 2018 midterm elections. It was the highest turnout ever recorded and more than double the number from 2015, according to a report from the Center for Information & Research on Civic Learning and Engagement (CIRCLE).

Additionally, Circle reports the number of young people registered to vote is already higher than it was leading up to the November 2016 election.

Millennials and Generation Z, citizens under the age of 39, will account for more than one-third of eligible voters this election, according to an analysis from Pew Research Center. The two generations represent the largest voting block, and of those Gen Z voters, 45% are expected to be non-white. 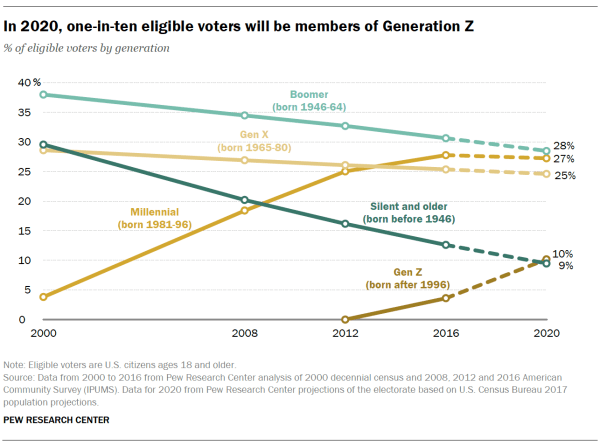 “If a student registers to vote and then the institution integrates voter education, policy education, civil discourse, deliberative dialogue, other opportunities for students to begin to understand democratic practice,” said Nudelman. “They're more likely then to actually go vote.”

“We've had to get very creative”

The ALL IN Campus Democracy Challenge works with 773 higher education institutions and over 8 million students in 49 states. The nonprofit has partnered with 1,445 campuses to institute nonpartisan participation through civic learning, political engagement and student voting.

During previous election years, the challenge had very strategic efforts around in-person events, said associate director Ryan Drysdale. But, like other areas of American life, the coronavirus pandemic has impacted in-person civic engagement on college campuses.

“We've had to get very creative,” he said. “We're able to reach people through virtual events and digital platforms that we would have never engaged with in-person events.”

MSU Denver has utilized email and social media to provide students with resources to help them register to vote and learn about the ballot. Journalism student Kelly Mutz, a civic and community initiative assistant for the university, is creating social media messages around voter engagement.

“Do they know what resources they can go look at? Do they know how to look at the Blue Book?” she said. “So those are questions that we're going to be asking students through Instagram, through polls and questionnaires and really relying on students’ response to just kind of determine how we communicate with them going forward after that.”

The university also has a dedicated voting website. Using the word “voter” as an acronym, the website gives students easy tasks to complete to earn rewards. “V” stands for voter registration. “O” is for organize.

“The 'T' is, tell us why you vote,” Mutz said. “This is encouraging students to just kind of speak up on their own social media, sharing with their friends and family about why they think it's important to vote, which I think can start really important conversations."

“Knowing how they'll vote, whether that will be in person, mail-in, drop off their ballot,” she said.

Many college students are voting for the first time while trying to decide which candidate to vote for and how they are going to vote, said Nudelman. COVID-19 has created a conversation in the U.S. about the differences in voting between states and, she continued, there is concern about voter suppression.

“I want to also say that that the evidence of voter fraud is actually quite small. Voter suppression is the issue,” she said. “Voting can be very confusing because the rules of engagement are different in any state.”

Colorado is one of a nearly a dozen states that allows everyone to vote by mail, and ballots are automatically mailed to voters. The state has also increased the number of drop boxes and Voter Service and Polling Centers (VSPC) from 2018. This year, 383 drop boxes and 342 VSPCs are available statewide for Colorado voters, according to the secretary of state.

She does not think COVID-19 will significantly impact MSU Denver’s student turnout, but between keeping a job or worrying about family members getting sick, students might disengage.

“If we see a drop, which I would not expect to see, but if we were to see a drop, I would think that it was probably because students have too much on their plate,” she said.

“What a privilege it is to vote”

In 2017 MSU Denver won the ALL IN Challenge for highest undergraduate voting rate. They won a best in class award two years later.

Mutz, who is 29 and registered to vote, believes the university’s high turnout is due to its unique demographics: older, working, first-generation and veteran students. MSU Denver also has a large number of undocumented students.

“When you're in class with those students and you can have that conversation with them, you understand what a privilege it is to vote and how important it is to make sure that your vote matters and it matters for the people who can't vote,” she said.

Valdez agrees. She plans to become a U.S. citizen one day and vote. In the meantime, she hopes her peers keep casting their ballots so the turnout rate at MSU Denver and other schools continues to rise.

“Nationwide I would just love for like the Gen Z, the Millennials to truly come out and vote,” she said. “So that our percentage can go up and that candidates know like, ‘hey, we're here. We listen, we know what's going on and we want a change.’”

Stephanie Daniel
The “American Dream” was coined in 1931 and since then the phrase has inspired people to work hard and dream big. But is it achievable today? Graduating from college is challenging, jobs are changing, and health care and basic rights can be a luxury. I report on the barriers people face and overcome to succeed and create a better life for themselves and their families.
See stories by Stephanie Daniel
Latest Stories