Culture & Identity
After The Sun Goes Down
The Mountain West News Bureau explores how an untold history of exclusion and racism in Western sundown towns haunts the region and affects residents of color today.

Part three of a four-part series

The hike from the abandoned Central Pacific train tunnels to the petroglyphs overlooking Donner Lake in northeast California is relatively short. But it’s hot and the trail is steep so the going is slow for the roughly two dozen kids from the Washoe Tribe of Nevada and California.

This is the group’s annual summer trip to swim in the lake, and the tribe’s Culture and Language Resources director Herman Fillmore wants the kids to get something more out of it. Fillmore asks a nearby chaperone if they remember the Washoe name for the place.

Fillmore turns to children and asks if they can repeat it. “Dosh Da Ow,” the kids say.

The kids "are able to, kind of, see this colonial world that we live in through a new lens.”

Herman Fillmore, culture and language director of the Washoe Tribe

Hearing the name serves as a simple reminder of how Donner Lake, nearby Tahoe, and much of the eastern Sierra Nevada Mountains have always been the home of the Washoe. But it’s not where these kids live today.

Most live in Nevada communities the government created to separate Indigenous people from nearby white towns and settlements. They’re similar to reservations, just closer to urban areas. Fillmore says many of the kids understand how that happened, and why.

“What I’ve seen a lot with our youth now is that they’re interested in our language and culture in new ways. They are able to, kind of, see this colonial world that we live in through a new lens,” Fillmore explained.

And for many, that brings an understanding that, for much of our history, official U.S. policy sought to eliminate Indigenous culture.

“From the federal government's perspective, that is always at the foundation,” said Matt Makley, a history professor at Metropolitan State University of Denver and author of The Small Shall Be Strong: A History of Lake Tahoe's Washoe Indians.

“It is this desire to assimilate and this national (move) to coalesce around the white, Anglo-Saxon, protestant identity and hyper-patriotism was very popular and Washoes were easy targets," Makley explained.

The Washoe traditionally were hunter-gatherers, moving through the eastern Sierra with the seasons. But that practice ended as white people poured into the region. Miners dug into the mountains in search of gold and silver; ranchers and farmers took the valleys.

When the Washoe were pushed out of their Native lands, the tribe was robbed of vital cultural practices such as its annual pine nut harvest and fishing in Lake Tahoe. Makley says one Bureau of Indian Affairs agent reported the tactics as a way to “properly civilize” the Washoe people.

Meanwhile, the nearby Stewart Indian School, built in the 1890s, had the mission of conforming Native children to white society. And while some parents chose to send their children to the boarding school, other children were taken away without their family’s knowledge or consent.

“We have generations of people who heard their language spoken at the home but they were chastised and told to not speak their language as far as being successful in American society,” Fillmore explained.

Of course, it wasn’t only the federal government enacting racist policies. Prior to World War I, Nevada’s Douglas County adopted an ordinance that prohibited Native Americans from being in the towns of Minden or Gardnerville after sunset — at the risk of jail time or worse.

In a 1984 interview with the University of Nevada, Reno’s Oral History Program, 70-year-old Washoe elder Bernice Auchoberry described her understanding of the law.

“The Indians weren’t allowed in town after 6 o’clock,” she said. “When the whistle blew you had to be on your way home. If you were caught on the street, or anywhere, you got put in jail.”

When the interviewer asked if she knew anyone who was arrested for being out after sundown, Auchoberry responded with an unequivocal yes. “A whole bunch of them; my father included...” she said.

"When I see the resistance from Minden making that change, it’s like… what kind of neighbor is that?”

“When you went to town you weren’t allowed in certain places,” she said. “You couldn’t eat in the restaurants. They had a soda fountain. You could go in there and order an ice cream, but you couldn’t sit down at a table and eat it.”

Douglas County’s sundown law wasn't officially repealed until the 1970s, but its legacy is central to a debate still raging today. That’s because twice a day in Minden, a siren wails from behind the town’s volunteer fire station and that can be heard for miles.

Town officials steadfastly assure residents it’s a tradition meant to honor first responders — and is not related to the sundown ordinance. They’ve resisted calls to shut it down.

But for many Washoe living in the area, such as tribal official Darrel Cruz, the siren signals enduring divides. He says the communities are entwined.

“We all go to the same school, play sports. Our kids do all that. (When) the pandemic hit, our health center opened up our doors to vaccinate anyone,” Cruz said. “So to me, when I see the resistance from Minden making that change, it’s like… what kind of neighbor is that?”

Douglas County has remained a mostly white area since record-keeping began in the latter half of the 19th century. During the 1900 U.S. Census, Douglas County had 1,534 residents, 95% of whom identified as white. Only 55 people were listed as “Indians,” making up about 3.5% of the county’s total population. And while the area has seen tremendous growth in the last century-plus, Douglas County is still overwhelmingly white.

According to 2020 U.S. Census data, more than 80% of the county’s roughly 50,000 residents identify as white alone, 12% are Hispanic or Latino and about 2% are Native American alone. All other races and ethnicities each comprise about 1% of the county’s population.

This year, Nevada lawmakers passed a law banning sirens from sounding at times once associated with sundown laws. And in an effort to comply with the law and to work with Washoe leaders, the town recently moved the siren to 5 p.m.

It is a move that has satisfied only some. And for Herman Fillmore, the Washoe Culture and Language Resources director, it underlines the challenges to preserve the tribe’s way of life.

Back on the trail, Fillmore says it’s important to understand what it means to be an Indigenous person in America -- and a Washoe specifically.

“Our culture, our language, are very unique and distinct, and we want our kids to be proud of those things that we were once forced to be ashamed of,” Fillmore said.

That culture is fragile. Fillmore says there are only about 10 elders left who can still speak Washoe fluently. 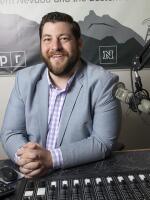